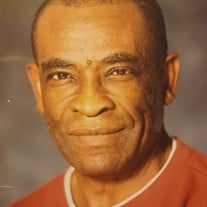 William Stewart passed away on Jan. 5, 2022, at home in Fairfield, CA with his oldest daughter and oldest granddaughter by his side. William Stewart was born on May 21, 1937, in Selma, Alabama to the late Earl Sr. and Mattie Stewart. He was born into a family of three brothers and three sisters, and he grew up in Houston, Texas. This was where he met the love of his life Vernell. On Aug. 10, 1959, he married Vernell Hall and in that union they had three children. Elwin, Xania and Rukuya. He took care of his wife until she took her last breath in April 2015. He moved to Fairfield, CA in 1978 where he helped open the newly built Anheuser-Busch and ultimately is where he retired after 50 plus years with the company. In March 1987 while working for the brewery he started a non profit organization in which he was the CEO, called families helping families. This was the way he wanted to repay those who helped him overcome drug and alcohol addiction. Every thanksgiving he and dedicated Anheuser-Busch co workers made sure that hundreds and hundreds of families were hand delivered boxes with turkeys so those families wouldn’t go without during the holidays. There was even a F.H.F. cookbook. During back-to-school time at our local Fairfield Park “Dove Park” he created a fair, carnival “like atmosphere”. Where he supplied all kids with backpacks with all school supplies inside them awaiting the school year to start. Snow cones, popcorn, cotton candy, BBQ hamburgers and hotdogs for the kids as well as raffles for computers and laptops for the school year. William was also the breweries mascot “Bud Man”. William was a devoted husband, father and grandfather and a huge influence in the community. Always respected and grateful a very humble man, he would give the shirt off his back if he saw fit. He loved fishing and whenever he got the chance, he took his boat named after his youngest daughter “The Rokuya” out to one of his favorite places “Grizzly Island” he always kept relaxed and positive outlook on life and always put his family first and definitely loved spending time with his grandchildren. William Stewart is survived by his two daughters Xania Stewart and Rukuya Stewart, three granddaughters: Romanda Coleman, angelique Davis and Oreal Stewart. Five great grand children Rheyjori, Mercedes, London, Vincent and one more new addition.

William Stewart passed away on Jan. 5, 2022, at home in Fairfield, CA with his oldest daughter and oldest granddaughter by his side. William Stewart was born on May 21, 1937, in Selma, Alabama to the late Earl Sr. and Mattie Stewart. He was... View Obituary & Service Information

The family of William Stewart created this Life Tributes page to make it easy to share your memories.

Send flowers to the Stewart family.