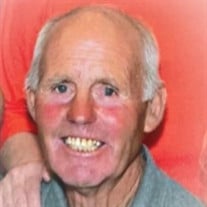 WILLIAM ‘BILL’ RICHARD HALE July 5, 1946 - Feb. 20, 2022 Bill passed away unexpectedly at home, on his Ranch on Feb. 20, 2022. He was born in Sacramento, California. Bill graduated from Armijo High School in 1964 where he was an athlete in both track and field and football. Following graduation, he served in the National Guard for four years before returning to his roots in the Suisun Valley where he went into farming on his family’s property, Hale Ranch. He would go onto farm a variety of crops with his largest focuses being safflower, wheat, sugar beats and beans. Bill was awarded 'Top five Sugar Producers' in 1996 and 'Outstanding Sugar Producer' in 1997 by Spreckels Sugar. He married in September of 1988 to his wife, Lorie (Flannery). They were married for 26 years before Lorie’s passing in 2014. During their marriage they had one daughter, Billie, born in April of 1989. Aside from his passion for agriculture, he enjoyed many hobbies such as aviation, hunting, fishing, day-trips with his wife Lorie, and his love for black Labrador Retrievers. During his early years Bill enjoyed trips to Colorado for deer hunting with friends; in addition he was an active duck, pheasant and dove hunter. Bill also took frequent trips to Liberty Island for cat fishing with his family. He was a member of the Native Sons of the Golden West Solano #39. He is preceded in death by his parents, Thomas D. and Mary Ione (Mangels); and sister, Mary Ann. We encourage all who knew Bill to help us remember him in a celebration of life at 1:30 p.m. Friday, March 11, 2022, at Bryan-Braker Funeral Home, 1850 W. Texas St., Fairfield. Reception to follow. The family kindly requests that in lieu of flowers, donations be made to the SPCA, an organization both Bill and Lorie were donors to for many years. Arrangements under the care of Bryan-Braker Funeral Home, 707-425-4697.

The family of William Hale created this Life Tributes page to make it easy to share your memories.

Send flowers to the Hale family.