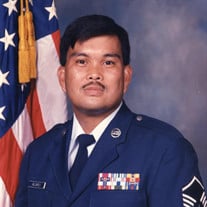 USAF SMSgt Ret. William “Bill” Alcares (66) passed away on December 23, 2020. He is survived by his wife of 45 years, Moira Alcares, his three children Kerry Natividad, Linden Alcares and Lisa‐Tiffany Alcares. His 10 grandchildren: Ashton Alcares (Miranda‐mother) Hunter Alcares (Nina Allen‐mother),Emma Ritchie, Gabriel Alcares (Megan Prince‐mother), Anjoli Natividad, Kawika Natividad (David Natividad‐father), Jonah Prince, Abigail Prince, Kyra Rabine (John Rabine‐father) Ian Alcares, and his two great grandchildren, Elvis Russell & Piper Santjer. His brothers, Gary Alcares, Patrick Alcares (Janet‐wife)and his sister, Lisa Regan. His nephew Chad Alcares (Julie & Paxton) and niece Kelli Regan. Bill joined the Air Force in 1972, right after high school. During his service, he was stationed all over the world and stateside. While stationed in England, he found the love of his life, and started his family. After his military career, he became a Veteran’s Benefit Counselor with Solano County for 20 years. He will be remembered for his dedication to his country and fellow veterans. He had many different titles in his life, Son, Brother, Husband, Dad, Uncle, Friend… but his favorite was Papa. He loved to spoil his grandchildren and enjoyed bragging about them any chance he could. He was the “baby whisperer” and was able to settle any fussy baby with his silly songs that he would make up on the fly. He is loved beyond measure and missed dearly. His legacy will be lived on through everyone who loved him. He was preceded in death by his parents, Alejandro Villaflor Alcares & Lucia Paden Alcares, and his eldest brother Andrew Alcares. “And Everything Else”

The family of William Alcares created this Life Tributes page to make it easy to share your memories.

Send flowers to the Alcares family.