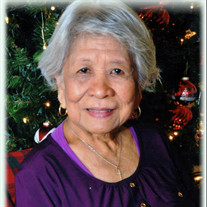 VICTORIA LLORENTE LUGTU Oct. 17, 1930 - April 6, 2022 Victoria Llorente Lugtu, 91, peacefully passed away on April 6, 2022. She was born in Corregidor, Philippines, on Oct. 17, 1930. Victoria was a graduate of Centro Escolar University, achieving her career goal of being a Dentist. She practiced for five years in Manila, before moving with her husband and eldest daughter, to San Francisco in 1961. She was offered a teaching position at UCSF, but eventually turned it down to devote herself to solely raising her family. She loved being a full-time mom. Part of her job enabled her to chaperone every field trip for her youngest daughter growing up, despite getting separated from the class and lost for several hours in Golden Gate Park on one of those class trips. As a devoted wife, mother and grandmother, part of her job was playing chauffeur as well. For decades, she drove her daughters to Catholic school on opposite sides of the city, and dropped her husband off at work along the Embacadero, all before 8 a.m. each day. Then, picked them all up at the end of the day. And in between, she cooked every meal of the day, but still found time to shop at Breuners and Macys, two of her all-time favorite shops. Her chauffeuring days continued in later years, as her grandchildren entered school, escorting them through college. Years later after their children were grown, Victoria and Romy, her husband of 60 years, volunteered as Eucharistic ministers and Marriage Encounter counselors for Corpus Christi Church, counseling countless engaged couples, who had to pass their course before getting married. She is survived by her daughter, Rachel Graham of Tacoma, Washington; daughter, Rowena Lugtu-Shaddox, of Sacramento; granddaughter and her husband, Alexandra and Ryan Waldrop of Roseville; granddaughter, Sabrina Shaddox of Woodland; and great-grandchildren, Declan and Romy Victoria, of Roseville, and Ricky-Timmy and Bentley McKean of Alaska. She is preceded in death by her beloved husband, Romulo. Viewing and rosary will be from 3 to 7 p.m. Monday, April 11, 2022, at Bryan-Braker Funeral Home, 1850 W. Texas Street, Fairfield. A Mass of Christian burial will be at 2 p.m. Tuesday, April 12, 2022, at St. Mary's Church, 350 Stinson Ave., Vacaville. A reception will immediately follow at the Hilton Garden Inn in Fairfield. Victoria will be laid to rest at 11 a.m. Wednesday, April 13, 2022, at Vacaville-Elmira Cemetery in Vacaville. Arrangements entrusted to Bryan-Braker Funeral Home. Friends and family are invited to share condolences with the family at www.bryanbraker.com

The family of Mrs. Victoria L. Lugtu created this Life Tributes page to make it easy to share your memories.

Send flowers to the Lugtu family.