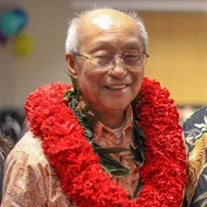 Obituary for Timothy A. Tagudin Timothy Artemus Tagudin, 95, passed away Saturday, March 7, 2020 in Fairfield, California. Timothy, the oldest of six, was born November 28, 1924 in Honoka’a, Hawaii on the Island of Hawai’i to Eulogio and Maria (Malasig) Tagudin. Timothy worked as an aircraft mechanic at Pearl Harbor Naval Base and Hickam Air Force Base. He also worked briefly at Wahiawa Hospital as an orderly and ambulance driver. In 1957, he started a new job at Travis Air Force Base in Fairfield, California as an aircraft mechanic until he retired. Timothy was an Honorary Lifetime member of the Knights of Columbus and one of the founding members of the Hui Hau’oli Hawaiian Club. He enjoyed diving for abalone, bowling, traveling and playing Keno in Reno or Las Vegas. His greatest pleasure was spending time with family, especially his grandchildren and great grandchildren. On June 25, 1949 Timothy was married to Coletta Agana. They moved from Hawaii to Fairfield, California in 1957. They settled into their home on Dakota St. where they raised eight children. Timothy and Coletta would make their family a priority by attending and supporting their children in their sports and band activities, taking trips and going camping. In 1964 the family took a trip to Disneyland and it was then Coletta came up with the nickname T-Troop. Over the years one by one the family would leave Dakota St, some to return briefly, but it remained the family home for almost 50 years. T-Troop continued to grow through marriages, grandchildren and great grandchildren. Numerous family reunions and gatherings were held at the Dakota St home over the years where Timothy and Coletta, who were inseparable, showered their family with their deep love. Sadly, Coletta passed away in 1994 from complications due to surgery, Timothy never left her side. Over the years, Timothy continued to keep his family a priority traveling across the country to visit his grandchildren and great grandchildren. In August 1997, Timothy married Roberta Corbin. They loved to take road trips in their RV. Then in 2005, Timothy sold the home on Dakota Street and he and Roberta became full time RVers and hit the road traveling throughout the US, Canada, Newfoundland and Mexico. No matter what their travel plans were Timothy would still make it a priority to visit family. He was able to attend grandchildren’s high school activities, graduations, and weddings. He tried to be there for every birth, birthday and milestone of his great grandchildren. Timothy was the epitome of a family man. He sacrificed much and traveled everywhere for the happiness of his family. Timothy is survived by his sons, Michael (Leonore) and Edward (Vickie), his daughters Diane (Robert) Black, Susan (Dan) Root, Jenny (Michael) Bender, and Sandra (Pete) Anderson, 17 grandchildren, and 23 great grandchildren. He is preceded in death by his parents, his wife Coletta, second wife, Roberta, sons Timothy, Jr. and Robert, and siblings, Nina, Lourdes, Falacita, Alfred and Juanito. Due to health concerns over COVID-19, Timothy’s services will be Private for the immediate family only. A Celebration of Life for Timothy will be set at a later date. In lieu of flowers, donations may be made to American Heart Association or American Kidney Fund. Arrangements are under the direction of Bryan-Braker, (707) 425-4697. You may sign the guest-book at www.bryanbraker.com

Obituary for Timothy A. Tagudin Timothy Artemus Tagudin, 95, passed away Saturday, March 7, 2020 in Fairfield, California. Timothy, the oldest of six, was born November 28, 1924 in Honoka&#8217;a, Hawaii on the Island of Hawai&#8217;i to Eulogio... View Obituary & Service Information

The family of Timothy A. Tagudin created this Life Tributes page to make it easy to share your memories.

Send flowers to the Tagudin family.