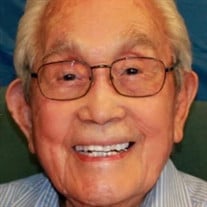 Teruo Ted Miyagishina, retired Major in the U.S. Army, passed away peacefully December 13, 2020. Ted was born April 10, 1919, in Roy, Utah. He served in France and Italy with the 442nd “Go for Broke” Infantry Regiment during WWII. As a career military serviceman in Army Intelligence, he served in various posts in New York, Virginia, Maryland, and Georgia, as well as in Korea and Japan. He married Tsuyako Grace Miyagishima of Lompoc, California on July 10, 1949. Their son James was born in 1953. During his time in the military, he received two degrees from the University of Maryland, a BS in Military Science, and a BA in History. Retiring from the military after 21 years of service in 1965, he went into teaching fifth grade at Allen School in San Jose, California.He retired from his second career in 1984. He spent his retirement years enjoying gardening, Utah family reunions and traveling. In 1997, he moved into the Paradise Valley Retirement Community n Fairfield, California. Ted was awarded the Congressional Gold Medal for his service as a member of the 442nd Infantry Regiment during WWII. He is survived by his wife; son; and son-in-law, Toby Harriman of Sonoma, California; as well as two sisters Kris Russell, of Palm Springs, California, and Shiz Shimoji, of Pasadena, California. He will be interred at Sacramento Valley National Cemetery Dixon, California.

The family of Teruo Miyagishima created this Life Tributes page to make it easy to share your memories.

Send flowers to the Miyagishima family.