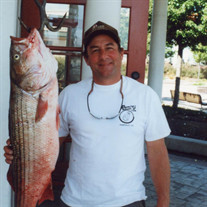 STEVEN JAMES PALFEY May 20, 1955 – June 6, 2021 Steven James Palfey, 66, passed away unexpectedly in his home in Fairfield on Sunday, June 6, 2021. Steve, or 'Palfey' as most called him, was born May 20, 1955 at Travis AFB in Fairfield, California to Steven and Juanita Palfey. Steve was a lifelong resident of Fairfield, graduating from Sam Yeto in 1973. Steve soon landed a job working for the Federal Government at the Mt. Tamalpais radar installation. This opportunity opened the door to a career serving our United States Military as a civil service employee for the Air Force at Travis AFB. Steve was a sheet metal mechanic by trade, serving to repair and rebuild many of the aircraft flying in and out of Travis, even in times of war. Steve retired in 2012, after 37 years of faithful service. In his off time, Steve enjoyed boating and fishing the waterways of Northern California. Softball was a huge part of his life, playing on many local championship teams over several decades. Steve was also fond of traveling. He and his longtime partner, Diane Honey, would often visit various Air Force bases throughout the West Coast. Anyone who knew Steve knew how important music was to him. He had a keen ear for melody and rhythm, as well as an uncanny perception of lyrics. Some of his favorite bands were Steely Dan, Joe Jackson and Sons of Champlin. In his later years Steve enjoyed the morning crossword puzzle and nightly Jeopardy episodes. Steve’s sense of humor could have anyone in tears. His quick wit and dry sarcasm were a rare and special combination that will be fiercely missed. Steve is survived by his daughter, Raychel Whedbee (husband Dallas Whedbee); son, Jacob Palfey; granddaughter, Maxine Whedbee; and brother, Paul Palfey; half sister, Sheryl Altman. He was preceded in death by his parents; and half-brother, Larry Stanley. Services will be held at 11:00 a.m. Wednesday, June 30, 2021, at Bryan-Braker Funeral Home, 1850 Texas St., Fairfield. A brief reception will follow at the same location. Arrangements are under the direction of Bryan-Braker (707)425-4697. You may sign the guestbook at www.bryanbraker.com.

The family of Steven James Palfey created this Life Tributes page to make it easy to share your memories.

Send flowers to the Palfey family.