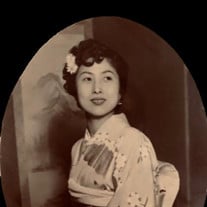 In Loving Memory of Sonoko Kirk Sonoko “ Sonny” Kirk, 91, passed away on July 17, 2019, at Fairfield, CA. She is survived by her three daughters, Patti Ann Kirk, Janet Susan Kirk & Debbie Kirk Zehm, four grandchildren, Marisa Bauson, Ian Simpson, James Guckian & Mei Zehm, along with four great grandchildren, Manny, Christian, and Jackson Bauson & Gus Furseth. A Remembrance Service will be held at Paradise Valley Estates, 2600 Estates Drive, Fairfield, CA, 94533, at Rawlinson Hall, August 7th, 1:30 p.m. As a teenager, Sonny, survived wartime Tokyo. She eventually married the love of her life, SMSgt. Billie Boone Kirk, USAF Ret. Dec, immigrated to the United States of America, learned English and raised a family. She also had a very successful career, rising to the top of her field as the regional head of accounts payable, for the Army and Air Force Exchange Service. She was an avid bowler until her mid-80’s, loved her dogs Momo and Hana, and was a 49er Faithful. Sonny, you were truly loved and will be missed. Bill is a lucky man to have you by his side again! Love Always

The family of Sonoko Kirk created this Life Tributes page to make it easy to share your memories.

In Loving Memory of Sonoko Kirk

Send flowers to the Kirk family.