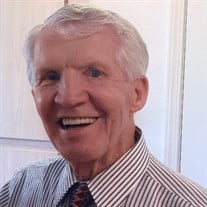 Sherwood T. Lunsted 1936-2019 Sherwood T. Lunsted, 83, of Fairfield died October 30, 2019 after a long illness. Born January 23, 1936 in Howard City, Michigan, he had resided in Fairfield the past 44 years. He served in the USAF for 20 years retiring as a SMSgt May of 1975. During his Air Force career, he was stationed in many parts of the US, including Travis AFB and had tours in Tripoli, Libya, Germany and Vietnam. In 1976, he began a second career in Real Estate first working with Red Carpet Realtors. In 1979, he got his Real Estate Brokers license and he and his partner Gene Sparks opened their own office – United Realty in Fairfield. He had a very successful real estate career for over twenty years retiring for the second time in October 2007. He was Past President of both the Northern Solano Association of realtors and Toastmasters International. He served on the board of Director for Meals on Wheels and was a dedicated volunteer at David Grant Medical Center for many years. He is survived by his Longtime Loving Companion Nancy Muto Reublin, three sons, Thomas Lunsted of Fairfield and Timothy Lunsted and Kevin Lunsted both of Riverside and grandsons Kyle, Travis, Ross and Kevin Jr. Interment with Full Military Honors will be at Sacramento Valley National Cemetery, Dixon, CA on November 14, 2019 at 9:00AM followed by a Celebration of His Life Service at Bryan-Braker Funeral Home, Fairfield at 11:00 AM with a reception to follow. In lieu of flowers, Memorial Contributions may be made in his name to Continuum Care Hospice Foundation, 5401 Old Redwood Hwy #10, Petaluma, CA 94504 or Meals on Wheels, 95 Marina Center, Suisun City, CA 94585 Arrangements entrusted to Bryan-Braker funeral Home (707) 425-4697 www.bryanbraker.com

The family of Sherwood T. Lunsted created this Life Tributes page to make it easy to share your memories.

Send flowers to the Lunsted family.