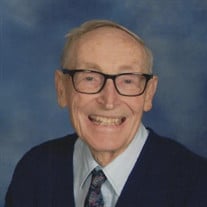 Roger J Quinn Feb 11, 1929 – May 8, 2020 Roger J Quinn, 91, died Friday, May 8, 2020, at Magnolia Court Retirement Home in Vacaville, California. Roger was born on February 11, 1929 in Oxford Nebraska to Jesse James Quinn and Minnie Helen (Shepker) Quinn. Roger graduated from high school in Richmond, California in 1947. He entered the Air Force in 1948, specializing in aircraft maintenance. He retired in 1970 as a SMSgt after serving at Yokota Air Base, Japan, Loring AFB, Maine, Travis AFB, California, and in the Korean War and Vietnam conflict. Roger married Angie Marsh (deceased) in 1952, and became a father to eldest daughter, Sandy and son, Michael (deceased). The family enjoyed traveling to Canada from Maine to visit life-long friends met in Japan and drove cross-country to settle in California in 1971. Roger became a widower in 1985. Roger’s second career was with University of California at Davis, California working as a supervisor for the grounds department, retiring in 1991. Roger married a second time to Shirley (Swanger) Knepp in 1986 and became stepfather and grandpa to Charles W. Knepp, Jr and Karen (Knepp) Longino and her children Jonathan and Stacy Gresham, and Nathaniel Longino. Roger and Shirley enjoyed a trip to Europe and several cruises to Alaska and the Atlantic Coastline. They took a bus trip to Alberta and British Columbia, Canada. Roger was a Charter Member of St. Mark’s Lutheran Church in Fairfield, California. He served on the Preschool Board and volunteered many years and countless hours on many projects and upkeep of the church grounds, committees, and positions as a beloved member of the church body. Roger leaves behind his wife Shirley, daughter Sandy, daughter-in-law Loretta, and stepchildren Charles and Karen. He also leaves grandchildren Jake, Derek, Matthew, Andrea, step-grandchildren Jonathan, Stacy, and Nathaniel. He leaves a niece Verna and nephew Steve, and many friends. He is predeceased by son Michael, and sister Jerry. A private interment will take place at Fairmont Memorial Park in Fairfield, California. Celebration of Life Memorial Service at St. Mark’s Luther Church to be announced as Covid 19 restrictions are lifted. Arrangements are under the direction of Bryan-Braker Funeral Home, (707)425-4697. You may sign the guestbook at www.bryanbraker.com.

The family of Roger J. Quinn created this Life Tributes page to make it easy to share your memories.

Send flowers to the Quinn family.