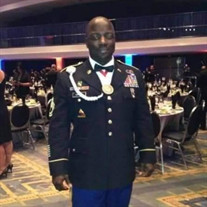 On May 20, 1976 in Wichita Falls, Texas a natural born leader was bestowed upon us known as Rodney Jerome Harris, born to proud military parents, Noble Harris Jr and Sally Ann Harris-Charron. Rodney was a kind hearted, soft spoken, ambitious young man who had a smile that would light up a room. To know him was to love him. Knowledge and Education was a passion that came easy to Rodney. He enjoyed reading and learning about life’s many lessons. Rodney set high standards for himself and anyone who came in contact with him. He knew education was the key to success. Rodney graduated high school from Atwater High, Class of 1995. Rodney went on to join the United States Army on May 27, 1999 where he served for 22 years rising to the rank of E9 Sgt. Major. While serving his country Rodney managed to receive a Masters Degree in Forensic Science and later on a Ph.D. in Counselor Education and Supervision. Some of Rodney’s greatest joys and accomplishments was serving his country and protecting his soldiers at any cost. Rodney served several tours abroad including Iraq, Afghanistan, Germany, and Qatar to name a few. Rodney was an exceptional leader and soldier in which he earned three Purple Hearts, The Soldiers Medal, Commendation Award and many other notable awards for his commendable service. Rodney was the best of the best! A true American Hero! Rodney touched so many lives. He was constantly encouraging and motivating anyone around him to be their best self. He shared wisdom, knowledge, life lessons, and inspiration in which he wanted everyone to succeed abundantly. He truly enjoyed his friends and family along with a nice IPA and juicy steak to boot! Rodney was no stranger to physical fitness, he loved to work out, cycle, hike and compete in Spartan Races. He could run circles around anyone! However, smiling, encouraging others, and being a constant leader was his greatest attributes. Always willing to give a helping hand, go the extra mile, or put you on a work out plan for you to achieve greatness. Rodney’s love, leadership, and encouragement will leave a life long legacy. He will be sorely missed and irreplaceable. Rodney You Are Loved and Honored Beyond Measure! Rodney leaves to cherish his precious memory: His daughter: Jada L Weston, Granddaughter: Halo L Hayes, Eldest Son: Devin Harris, Youngest Son: Cedric Williamson, Father: Noble Harris Jr., Mother: Sally Harris-Charron, Step Mother: Cheryl Harris, Step Father: Robert Charron, Brother: Reginald Harris, Nephew: Andrew Skalicky Sister: Anneke Harris, Brother In Law: Robert K Shaw Jr., Niece: Saniah A Shaw, Step Sisters: Gevona Lee and Natasha Forge, along with a host of Aunts, Uncles, Cousins, and Life Long Friends.

The family of Rodney J. Harris created this Life Tributes page to make it easy to share your memories.

Send flowers to the Harris family.