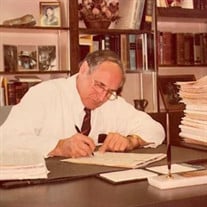 Dr. Richard Marie Valeriote August 5, 1929 – June 13, 2021 It is with great sadness that we announce the death of our extraordinary father and our hero, Dr. Richard Marie Valeriote. Dad died Sunday, June 13, 2021, at 91 years of age, of heart failure. Known as Richie growing up, then as Dick as an adult, Dad overcame enormous obstacles to accomplish more than he ever dreamed was possible. Dad was born in August of 1929, the 15th of 16 children in Guelph, Ontario, Canada. His parents, first generation Italian immigrants, fell on hard times during the Great Depression. He remembered his mother telling him, after paying for two older brothers’ education, 'There’s nothing left for you. You’ll have to make your own way in the world.' And he did. He gained admission to McGill University, and persuaded 46 acquaintances and strangers to loan him money for undergraduate and medical degrees at McGill. At McGill he met the love of his life, Polly Pillet. A year after meeting, they married, and began the family that would eventually comprise five children. Tuberculosis soon separated them, and dad spent a year being treated for TB in a sanitarium. Polly waited for him, and when he recovered, he went back to McGill and finished medical school. They moved their family first to Flint, Michigan, for Dad to complete his internship. Then, fleeing the cold, they moved to Fairfield, California. Dad embarked on a long and successful career as a family physician, becoming a skilled diagnostician. Before the days of specialized OB/GYNs, he delivered hundreds of babies. Up until recently, when he was out and about in Fairfield, people would greet him and say, 'You delivered me!' A serendipitous event occurred when one patient paid him for his medical services with a parcel of land. That initiated Dad’s second, simultaneous career in real estate development. He eventually brought all three of his sons into the development business. Ever the Renaissance man, he loved learning new things. He subsequently added a third career to his resume when he formed the Bank of Fairfield. He remained Chairman of the Board of that bank for years until it was acquired by Bank of the West. Dad diligently paid back the college loans he had taken from friends and acquaintances. Finally, six years after med school, he paid off the last one. He also repaid the generosity of those benefactors by emulating it. He made large contributions to McGill University and Santa Clara University, and was on the Board of Regents at Santa Clara. Despite working hard at three jobs, Dad was home every night for family dinner with Polly and his five children. He doted on Mom, who he always said was “the prettiest woman in the room.” He drove thousands of miles in the family station wagon and various RVs, exploring much of the US and Canada, and creating wonderful childhood memories for his kids. Dad wrote a memoir called Alice Street, which was published by his alma mater, McGill University. When the local Barnes and Noble threw a book-signing party for him, people were lined up out the door to have their copies of Alice Street signed, and to express their appreciation for his kind medical care. It was the sort of tribute that usually occurs only when a person has died. We are grateful he was able to enjoy it during his lifetime, with his wife and family present. Even with all the hardships of growing up hungry and poor and the year suffering with tuberculosis, the greatest tragedy Dad had to face was at the end: watching his wife Polly suffer and die with Parkinson’s disease. Going on without her took all his strength, compounded as it was by the Covid 19 lockdown. Alone and isolated after 69 years of marriage, he depended on the love of his children and kind caregivers to assuage his loneliness. Dad’s faith in God helped him through this final challenge. Dick Valeriote is survived by his children, Catherine Valeriote (Richard Anderson), Susan Valeriote (Ken Goldman), Rick Valeriote (Melissa), Chris Valeriote (Julie) and Pat Valeriote; brother, Pacifico Valeriote; sister, Anna Bordignon; grandchildren, Mattie Goldman Magdovitz (Joe), Mike and Nick Goldman, Ariel and Lauren Kozicki, Talia and Elena Valeriote, Matthew, Jonathon (Kiana), Dominic, and Christina Valeriote; and great-granddaughter, Maya Paulette Magdovitz. Dad’s funeral Mass will be held at 11 a.m. Wednesday, July 7, 2021, at Holy Spirit Church, 1070 N. Texas St, Fairfield, California. A lunch reception will follow at Paradise Valley Golf Course, 3950 Paradise Valley Dr., Fairfield, California. All who knew him are welcome. Arrangements are under the care of Bryan-Braker Funeral Home, 707-425-4697. You may sign the guestbook at www.bryanbraker.com

The family of Dr. Richard Marie Valeriote created this Life Tributes page to make it easy to share your memories.

Send flowers to the Valeriote family.