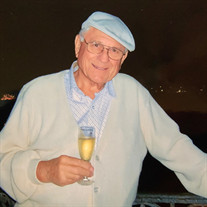 Au revoir Richard C. Spies Richard Clavern “Dick” Spies born January 9, 1926 passed away peacefully November 13, 2019 in Paradise Valley in Fairfield, CA surrounded by the love of his family. Dick is survived by his beloved wife Carol “Scotty”; daughters, Jo Ann (Kevin) Athey, Claire (Steve) Russo, Corinne Williams; grands: Cameron, Maddie, Peter and KC, nephews Nick (Marianne) & Tom (Celeste) Pettijohn and grandnieces Alli, Anna Leigh and Amelia. Dick was preceded in death by his parents Edith and Otho Spies and son Richard Davis Spies. Dick grew up with a passion for the outdoors and honed his survival skills hiking and camping in the Sierras after his family moved from the Northwest to Berkeley, CA. During his teenage years as a member of the Boys Scouts of America, Dick became an Eagle Scout and among other things developed his “safety first” approach he took into to all future activities. A true patriot, at 17 Dick requested his parents sign a release for early enlistment into the US Navy. Dick served in WW2 on the USS Southerland as a Sonar Tech and also served his shipmates as the resident barber. He loved sharing how his Navy experience shaped his positive attitude, spirit for loving life and how managing his Naval responsibilities for sonar detection of derelict mines developed his lifetime “stress parameter” management philosophy. After WW2 ended (“Thanks Truman” he’d say) he graduated with a degree in Forestry from UC Berkeley. As an ATO fraternity brother attending Cal the same time his sister Carol was attending UC Berkeley and in the AOPi sorority, Dick was introduced by his sister to her sorority sister, Carol Madelyn Davis. After a courtship filled with singing and dancing Dick and Carol Davis were married in Carmel California in 1952. They’ve had a 67-year love affair. What a team they were as they raised 4 children, were active as Presbyterian church members, Dick serving as a Deacon. Carol and Dick traveled the world together and had many additional travel adventures with dear friends up until the recent past. In addition to traveling to lands afar, Dick and Carol loved taking road trips across the USA to visit friends. Dick became a Certified Nurseryman and worked in horticultural sales for Ball Seed Company until he was in his mid-80s. He loved his sales career. Even in retirement he was always involved with landscape beautification projects, adding color and putting his unique stamp on the world in his special way. Dick always loved music, played many instruments by ear and continued to sing & dance anywhere, anytime right up until his last few months of his life. He was a dedicated SPEBSQSA Barbershop chorus member and through the years performed with the chorus always singing with pure joy in his eyes and in his smile. Dick touched so many hearts and made friends easily with his incredible wit, sense of humor and lighthearted spirit. He would begin a conversation with whomever was near him, no matter their age, color, gender or place in life. Dick was always a positive mental attitude (PMA) guru and developed his positive mental attitude motto through his time in the Navy and throughout his successful sales career. He shared his PMA outlook until his final days – he didn’t waste any time getting to ‘the heart of life matters’ in conversation. Until the very end of his days he continued sharing his stress parameter tips and had his personal motto printed on business cards that he handed out to those interested: DO IT NOW. DO IT RIGHT. FOLLOW THROUGH, WITH ENTHSIASUM! WDFA (we don’t fool around) Richard Spies was a humble, private man in his personal relationship with God. By inspirational example, Dick showed us what it meant to love deeply and lived devoted to God and family; he was deeply loved in return. His legacy of love, humor and fun and as he would say, “leaving footprints in the sand” will be carried on and remembered in our hearts forever. In lieu of flowers, please make donations to: Veterans Wounded Warrior Project: http:///support.woundedwarriorproject.org One Mind. Brain Health Research: https://onemind.org/take-action/donate/ Please check back later for Celebration of Life information.

The family of Richard Clavern Spies created this Life Tributes page to make it easy to share your memories.

Send flowers to the Spies family.