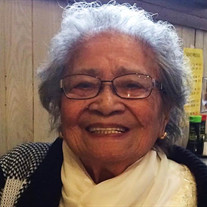 Remedios Cotelo Reyes, affectionately known as Mama/Grandma Rem/Meding to her family and friends was born on November 11, 1924 in San Quentin, Pangasinan, Philippines to Magdalena Gallegues and Felipe Cotelo. She was the eldest of 9 children. In 1950, she married her beloved husband Pascual Rayos Reyes. Pascual worked at a bank while Remedios spent her days with their 6 children. They lived in Baguio City, Philippines. She was predeceased by her husband in 1988 and by her son in 2019. Mama Rem migrated to the United States in 1990. She first moved to Suisun, CA where she lived with her daughter, Reina, and her family. As a dedicated and devoted mother and grandmother, she treasured her children and grandchildren. Embracing every moment with them, she shared her time in Suisun and Union City, babysitting her grandchildren as well as the children of family friends. She also loved tending to her garden, crocheting, watching her favorite TV shows, and cooking her favorite dishes. Mama Rem finally settled in Fairfield, CA in 2006 with Reina and her family. She was a devout Catholic, faithful and prayerful and a parishioner at Holy Spirit Church in Fairfield. In her later years, she’d spend her days playing spider solitaire and watching her favorite team, the Golden State Warriors. She has touched the lives of many people with her smile, generosity and her spirited sense of humor. She was a strong, determined and hardworking WONDER woman. Remedios is survived by 5 of her children and their spouses: Arsenio (Teresita), Rolando (Conchita), Victorio (✝) (Florifes), Jose (Eva), Reina (Dave) and Grace Mary (Castor & Lusha); 14 grandchildren, 2 great-grandchildren and 1 on the way. She will be deeply missed but her legacy lives on in the lives of those she loved. Remedios’ final resting place will be at St. Alphonsus Cemetery in Fairfield, CA.

Remedios Cotelo Reyes, affectionately known as Mama/Grandma Rem/Meding to her family and friends was born on November 11, 1924 in San Quentin, Pangasinan, Philippines to Magdalena Gallegues and Felipe Cotelo. She was the eldest of 9 children.... View Obituary & Service Information

The family of Remedios Cotelo Reyes created this Life Tributes page to make it easy to share your memories.

Send flowers to the Reyes family.