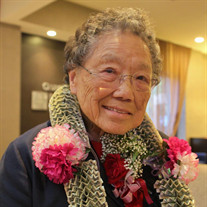 Rebecca “Becky” Lum, 90, passed away peacefully on November 23, 2020, in Vacaville, California. Becky was born October 19, 1930, to Harry and Lillie Lum in San Francisco, California, where she lived from childhood through college. Driven and industrious from the earliest age, she recalled earning her “candy money” when she was 7 years old by working at a sweatshop for Levi Strauss where she folded and stacked Levi’s jeans for 7 cents a dozen. She attended Francisco Junior High School and Polytechnic High School. Already stronger than she looked, she loudly played the large and clumsy bass drum in the Chinatown Drum and Bugle Corps. She was naturally athletic and enjoyed badminton, ping-pong, and tennis, even earning medals in city championships when competing on a Chinese girls’ basketball team. Becky majored in science at the City College of San Francisco and later San Francisco State College, with aspirations to become a science teacher despite counselors discouraging an Asian-American woman from such ambitions. She bravely faced discrimination when she began her teaching career in 1956, when after a difficult job search she was hired to teach both algebra and physical education at CarlMont High School in Belmont but could not find a place to live nearby because of her ethnicity. She persevered, living in the back of a plumbing supply office in San Carlos, until she was offered a position to teach math at Armijo High School in 1958. Although she was the first Chinese teacher at the school, she felt at home amidst the “cultural gumbo” of students and “never had a bad day at Armijo,” where she spent 33 years teaching analytical geometry, trigonometry, and calculus as well as coaching tennis, basketball, and badminton. Her stellar reputation preceded her when she joined the faculty at Solano Community College in 1988, and there she taught math and badminton for 30 years, retiring shortly before her 89th birthday. Having “too much fun” teaching to truly retire, she was especially proud of the intermediate algebra classes she taught to inmates at California State Prison Solano in the last few years of her career as an educator. Although Becky (Miss Lum to her students) humbly described herself as being “the lucky one” to have taught rising lawyers, doctors, and Ph.D.s, the Armijo Alumni Association honored her stalwart dedication as a leader and educator with induction into the Armijo Alumni Association Hall of Fame in 2015. A self-described “softie” with a loud voice, her generosity and fiery passion manifested outside of her career as well. In the last two decades, badminton was the nucleus of her energy and social life. She taught badminton for the Vacaville Community Services Department, and held “open court” at Solano Community College where all members of the public were welcome. Under her watch, badminton at Georgie Duke Recreation Center became the longest-running sports program at over 20 consecutive years. Each day, she watched over the badminton court like a “mother hen” tending her brood, ensuring everyone had a chance to play and providing individualized coaching advice. The group expanded with time as Becky spread the word about the joys of badminton to everyone who crossed her path, from former students to grocery-store cashiers. Newcomers were welcomed with a lesson from Becky herself. Although not a digital native, she learned to manage an email list of hundreds of people to ensure that last-minute schedule changes would not cause inconvenience. Throughout these years she not only volunteered countless hours of her time, but also personally donated equipment to ensure the sport was accessible to anyone who had an interest in learning. Truly beloved to the badminton community, dozens of people gathered each year to celebrate her birthday. In life, Becky saw herself as a “salmon swimming upstream,” with the odds stacked against her. Although a perhaps unintended analogy coming from Becky’s love of fishing, when her first job required that she teach swimming — and she did not know how to swim — she boldly cold-called an Olympic swim coach and persuaded him to not only teach her how to swim, but teach her how to teach swimming. For eight months, she took weekly lessons from him and practiced every day until she was proficient enough to perform her teaching duties with confidence. Like the metaphorical salmon, Becky approached her life with a ferocity of effort, guided by a strong moral compass. Even in the last month of her life, her energy was palpable when she described returning to the badminton court to teach: “There’s still at least 10% of my knowledge that I haven’t shared with you!” she would exclaim. Perpetually the teacher, Becky felt that she was never done giving — and indeed the lessons she has taught us in courage, integrity, determination, and resilience will not end with her passing. Becky is survived by her sister, Rowena Jang (Joseph, predeceased); brother, Walton Lum (Faith); niece, Jaye Van Kirk (Timothy); nephews, Michael Lum (Lee Ann), Rodney Lum (Kim) and Scott Lum; grand-nieces, Audrey Jang and Emily Lum; and her grand-nephews, Gregory Lum, Garrett Lum, Ryan Jang and Jonathan Lum. She was preceded in death by her parents, Harry and Lillie Lum; brother, Arnold Lum (Grace, predeceased); and her nephew, Jeffery Jang (Maria). Drive-thru funeral services will be held from 10:00 AM - 12 noon on Tuesday, December 15, 2020, at Bryan-Braker Funeral Home in Fairfield. Interment will be in Fairmont Memorial Park in Fairfield, CA.

Rebecca &#8220;Becky&#8221; Lum, 90, passed away peacefully on November 23, 2020, in Vacaville, California. Becky was born October 19, 1930, to Harry and Lillie Lum in San Francisco, California, where she lived from childhood through college.... View Obituary & Service Information

The family of Rebecca Lum created this Life Tributes page to make it easy to share your memories.

Send flowers to the Lum family.