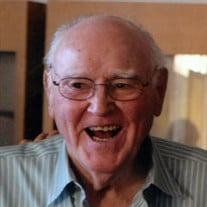 Raymond “Ding” DeGracia 1/1/29 – 7/25/19 It is with a heavy heart and deep sorrow that we announce the passing of our beloved father, grandfather, brother, uncle and friend, Raymond “Ding” DeGracia. He slipped away peacefully with family and friends at his side. Born to Joaquin and Josefa DeGracia on January 1, 1929 at Solano County Hospital in Fairfield. He was the 4th of 6 children. The family lived on one of their ranches in Suisun Valley where he started working at an early age. He attended Fairfield Elementary grade school, and then Armijo Union High School and graduated in 1946. He served as Class President throughout his 4 years at Armijo. He excelled in most sports and was a 4 year member of the Block A Society. After graduation, he worked briefly for the Southern Pacific Railroad before he volunteered to serve in the US Navy. Upon returning he joined the Fairfield Police Department, achieving the ranks of Sergeant, Captain, and ultimately the Chief of Police. He was the youngest appointed Chief in the State of California at that time, as well as the 2nd appointed Chief of Police for the City of Fairfield. He was also a partner in “The Crossing Sport shop” which was located where Union Avenue crossed the railroad tracks into Suisun City. This later became the Depot Club. Before entering the Navy he met his future wife, Anne Marie Haluzak. In 1948 they were married in Waycroft, Georgia near Florida where he was stationed. They returned to California and had four children: Randall, Gary, Steven and Luanne. Anne passed in 1968. He left the police department in 1965 and went into the Bar business. He first bought the “Tail Spin” on North Texas Street and had it until 1968. He didn’t own the building and lost his lease. In 1969 he had a new building constructed on West Texas Street where it is still in business. He and his 2nd wife Helene owned and operated “Ding’s Cocktail Lounge“ for 32 years. During that time he was well known for Ding's Picnics at Lake Solano Park, his annual “Coot” feeds, “Mountain Oyster feeds” and various other gatherings he hosted. He & Helene along with their good friends George & Penny Oless also had a successful food and liquor catering business. Dad’s hobbies included Golf, Fishing, Hunting and cooking for his family. He taught all of us the true meaning of family and friends. He also instilled in us the importance of integrity and self-respect and always said if you feel in your heart that you are right you should not yield and he never did. We all will remember the great times we had fishing, tubing or just relaxing at his trailer at Lake Berryessa. Ding was a member of the Fairfield Moose Lodge #861 since 1967 and served as their “Governor”, a charter member of BPOE, Fairfield Elks Lodge #1976 for 65 years and served as the “Exalted Ruler” and he was a charter member of the Native Sons of the Golden West, Solano Parlor #39. For his dedication to public service he was awarded “Life Member” status to these organizations. He was well known for his skill in the kitchen and cooked for all of their various events. He will truly be missed by his family and a lifetime of friends. He is survived by his sister Martha Moore, his children Randall, Gary (Jan), Steven and Luanne, stepsons Terry (Sue) & Gerry (Sarah) Kirstein and numerous grandchildren and great grandchildren and Penny Oless, Dad’s friend and companion of many years. He is preceded in death by his parents Joaquin and Josefa DeGracia, his brothers Jack, Julian, and Pete, his sister Josephine Rhodes, and his wives Anne and Helene. Family and friends are invited to join us for one last Ding's Picnic on Sept. 8 at 11:00 am, at Pena Adobe Park in Vacaville. Interment will be private. If you would like to make a donation in Raymond "Ding" DeGracia's name, please send it to Kaiser Hospice, 975 Sereno Dr. Vallejo, CA 94589 or the Make a Wish Foundation at SF.Wish.org

The family of Raymond "Ding" DeGracia created this Life Tributes page to make it easy to share your memories.

Send flowers to the DeGracia family.