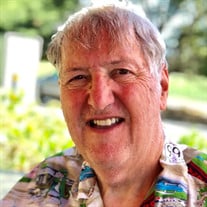 RAYMOND GARY BRUN Jan. 11, 1949 – Feb. 18, 2020 Raymond Gary Brun passed away from complications of Parkinson’s disease on Feb. 18, 2020, surrounded by his family and friends, at NorthBay Medical Center in Fairfield. Raymond was born in Fairborn, Ohio to Raymond and Mary 'Peachy' (Bova) Brun on Jan. 11, 1949. On May 5, 1979, he married Beverly Cheney in Dayton, Ohio. Within six months his employer, Robbins and Myers, promoted him and relocated him and Beverly to Fairfield. Ray left Robbins and Myers when the plant was moved to Texas, deciding to go to work for himself and help small business owners. He started the TAB East Bay North franchise of The Alternative Board and was very successful for 20 years. His hobbies included hiking, reading, writing and watching sports, particularly the Golden State Warriors, USC football and USC basketball. He loved to travel, and Hawaii and Aruba were his favorite places in the world. He previously served on the City of Fairfield Planning Commission. In 2014, Ray was diagnosed with Parkinson’s disease. He became active with the online Parkinson’s support group 'Never Give Up,' and wrote several essays on dealing with PD emotionally and spiritually. He exercised every day and never lost his fighting spirit and positive attitude. Ray is survived by his wife, Beverly Brun; daughter, Kristen Brun; brother, Ronald (Rita) Brun of Dayton, Ohio; and sisters, Marlene (Tom) O’Rourke of Fairborn, Ohio and Geryl 'Gee' (Karl) Whisman of Dayton, Ohio. He is preceded in death by his parents, Raymond and Mary 'Peachy' Brun; and his brother, Timothy Brun. A memorial service will be held at 11 a.m. Wednesday, March 11, 2020, at Bryan-Braker Funeral Home, 1850 W. Texas St., Fairfield. In lieu of flowers, memorial donations may be made to the Michael J. Fox Foundation for Parkinson’s Research (michaeljfox.org) or the Parkinson’s Foundation (parkinsons.org). Arrangements are under the care of Bryan-Braker Funeral Home, 707-425-4697. You may sign the guestbook at www.bryanbraker.com.

The family of Raymond Gary Brun created this Life Tributes page to make it easy to share your memories.

Send flowers to the Brun family.