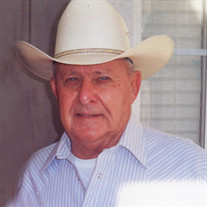 RALPH LORY ‘BUD’ CRAVEA Dec. 21, 1938 – Feb. 16, 2020 Ralph Lory 'Bud' Cravea passed away on Sunday, Feb. 16, 2020. Bud was born on Dec. 21, 1938 in Napa, California to parents, Lory and Dixie Cravea. He grew up in Green Valley attending Falls Grammar School and graduating from Armijo High school in 1956. Always wanting to be cowboys Bud and his friend, Jake Rush went to work on the Bing Crosby cattle ranch in Tuscarora, Nevada. Spending long days on their horses on cattle drives and sleeping on the frozen ground they took the chuck wagon cook's advice and six months later returned home. Bud enlisted in the United States Marine Corps and was stationed in Concord, California coming home most weekends. During this time, he married Dianne Black on Nov. 27, 1960. After completing his military obligation, he was employed as a Solano County Deputy Sheriff and 30 years later he retired as a Captain and custody division commander. Now retired Bud's hobby of raising cattle grew as the late Roy Mason mentored him in the cattle business. Family and friends helped him through the years with vaccinating, branding and weaning. This he enjoyed until illness forced him to retire again. During this time Bud also served one term as a director of the volunteer Cordelia Fire Protection District. Bud is survived by his wife of 59 years, Dianne; twin sons, David and Steven; grandsons, Clayton and Chad; brother, Gene (Irene); sister, Dede (Art) Engell; sister-in-law, Carol Black; cousins, Al Guyan, LaVerne Machado and David Massa; seven nephews; and two nieces. He was preceded in death by his parents; and brother-in-law, Michael Black. A memorial service will be held at 10:30 a.m. Thursday, Feb. 27, 2020, at Bryan-Braker Funeral Home, 1850 W. Texas St., Fairfield, with a burial immediately following. Arrangements are under the care of Bryan-Braker Funeral Home, 707-425-4697. You may sign the guestbook at www.bryanbraker.com

The family of Ralph Lory Cravea created this Life Tributes page to make it easy to share your memories.

Send flowers to the Cravea family.