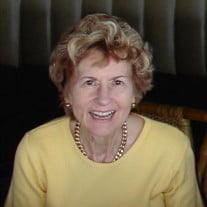 Polly Valeriote Obituary We are saddened to announce that our brave and beautiful mother, Polly Pillet Valeriote, passed away Sunday, March 2 at Paradise Valley Estates in Fairfield, from complications of Parkinson’s Disease. She was eighty-eight years old. Polly was born on October 22, 1931 in San Antonio, Texas to Col. Frederick A. Pillet and Pauline Schicker Pillet. As an “Airforce brat” (and Shirley Temple look-alike) she lived in multiple states and countries, including the Philippines and Turkey. Throughout her education, she attended 13 schools, and graduated with a Bachelor of Arts in English Literature from McGill University in Montreal. McGill is where Polly met the love of her life, a young medical student, Richard M. Valeriote. Their life together began at a college dance. Then, and for the rest of her life, Dick said she was always “the prettiest girl in the room.” Polly and Dick married a year after meeting, and soon began the family that would eventually comprise five children. Polly stood by her husband when he had to spend a year in a sanitorium to be treated for tuberculosis. Together they moved to Flint, Michigan for Dick’s internship, and then to Fairfield, California to set down roots. As she raised her children, Polly was active in several community groups. She joined the Wednesday Club and American Association of University Women, and was a member and officer of each for years. With these groups and others, she honed her wicked bridge-playing skills. Polly was also a member and officer of the PTA at Holy Spirit School, where she organized the school library and converted it to the Dewey Decimal System. She helped distribute food to the needy with a group called Fish. Polly was lively and fun, whether she was dressing as a dance-hall girl for the Kiwanis Club Western Night, or running the Bay to Breakers race with her husband. She planned wonderful vacations for the family, made sure her sons got to play baseball and was a 4-H leader with her daughters. She was a great cook and a consummate party hostess. Most of all, she was always available to support her husband and kids. As one family friend observed, “You can talk to your mom about anything!” Just one of the tragic aspects of her Parkinson’s Disease was that it limited her ability to speak in her final year. Polly is survived by her husband Dick, and children: Catherine Valeriote (Richard Anderson), Sue Valeriote (Ken Goldman), Rick Valeriote (Melissa Valeriote), Chris Valeriote (Julie Valeriote) and Pat Valeriote. Also by her grandchildren: Ariel and Lauren Kozicki, Mattie Magdovitz, Michael and Nick Goldman, Talia and Elena Valeriote, Matthew, Dominic, Jonny and Christina Valeriote. Polly’s funeral Mass will be Friday, March 20th at 11:00 AM at Holy Spirit Catholic Church, 1070 North Texas Street in Fairfield. All who knew her are invited to attend the Mass and the reception to follow at the Clubhouse at the Paradise Valley Golf Club (3990 Paradise Valley Drive, Fairfield.)

Polly Valeriote Obituary We are saddened to announce that our brave and beautiful mother, Polly Pillet Valeriote, passed away Sunday, March 2 at Paradise Valley Estates in Fairfield, from complications of Parkinson&#8217;s Disease. She was... View Obituary & Service Information

The family of Polly Pillet Valeriote created this Life Tributes page to make it easy to share your memories.

Polly Valeriote Obituary
We are saddened to announce that our...

Send flowers to the Valeriote family.