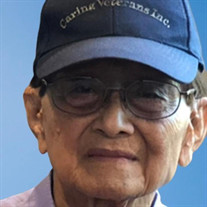 Perfecto Solano Marino May 7, 1932 – November 27, 2021 In loving memory, Perfecto S. Marino of Fairfield, CA passed away peacefully on November 27, 2021 at Kaiser Permanente Vacaville Medical Center. Born on May 7, 1932 in Calolbon, Catanduanes in the Philippines, he was a resident of Asan, Guam and Fairfield, CA. A Sergeant in the U.S. Army. He was honorably discharged in September of 1959. A General Manager of Royal Management Inc. for 31 years on Guam, he retired in 1999. He is remembered as a compassionate, understanding, and caring boss beloved by his employees. He enjoyed his retirement, traveling between Guam and Fairfield with his wife, Concepcion Ignacio Marino, helping to raise his grand and great-grandchildren. He is remembered as a patient and devoted husband, father, grandfather, and great-grandfather. He was a jack of all trades who enjoyed carpentry and spending time outdoors. He is survived by his wife of 61 years, three children – Marie M. Lucio, Leonor M. Mendiola, and Paul I. Marino, 11 grandchildren and 16 great-grandchildren. He is preceded in death by his parents, Juan & Juana S. Marino; in-laws, Enrique R. & Soledad J. Ignacio; son-in-law, George F. Mendiola; and great-grandson, Khoi C. Hoang. Last respects will be paid on December 28, 2021 at Our Lady of Mount Carmel Fairfield, CA. He will be interned at Sacramento Valley National Cemetery Dixon, CA at a later date.

The family of Perfecto Solano Marino created this Life Tributes page to make it easy to share your memories.

Send flowers to the Marino family.