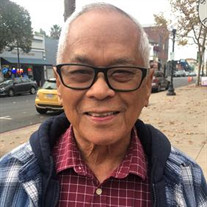 Paul Canumay 1938-2020 Paul Canumay, 82, died in Fairfield, CA on November 17th 2020 in the home of his eldest son. He was fighting a six-year battle with Non-Hodgkin’s Lymphoma, and was surrounded by family during his last days. He is survived by his wife, Amy Canumay (Celdran), his two sons, Patrick and Allan, his daughter-in-law, Sheryl Canumay (Jackson), two grandchildren, Brett and Sallie, his sister, Natividad Taylor (Canumay) along with her husband, children, grandchildren and great-grandchildren, Raboy ohana, Tayabas family and Canumay family. Paul was born on January 1st 1938 in Kahuku, Hawaii. He graduated from Kahuku High and Intermediate school in 1956, and moved to the Bay Area where his sister soon joined him. He studied Surveying at the University of California, Berkley until getting his surveying license. He married his wife in 1966 in Oakland, CA, and soon completed their family with their two sons. Paul began working as a Professional Land Surveyor, and eventually started his own business, Canumay Land Surveying, where his youngest son, Allan, joined him. He found his greatest joys in spending time with his family, photography, watching his grandchildren grow up and graduate college, and working. Paul had a passion for surveying, and actively ran his company until about 2 weeks prior to his death. The Canumay Family wishes to extend our sincere thanks to Paul’s Oncologist, Dr. Lesley Martin (and staff), for her tireless efforts in patient advocacy and care. Arrangements are under the care of Bryan-Braker Funeral Home, 707-425-4697. You may sign the guestbook at www.bryanbraker.com

Paul Canumay 1938-2020 Paul Canumay, 82, died in Fairfield, CA on November 17th 2020 in the home of his eldest son. He was fighting a six-year battle with Non-Hodgkin&#8217;s Lymphoma, and was surrounded by family during his last days. He... View Obituary & Service Information

The family of Paul Canumay created this Life Tributes page to make it easy to share your memories.

Send flowers to the Canumay family.