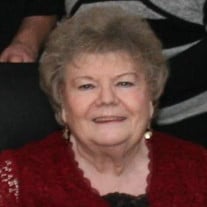 Patricia Ann Scott of Fairfield, California passed away peacefully surrounded by family and friends on January 11, 2020 at the NorthBay VacaValley Hospital in Vacaville. Pat was born in Bromborough Wirral Cheshire, United Kingdom on April 26th, 1938 to Sidney and Beatrice (Moran) Roberts and had three brothers Derek, Alan, and Ian. She married the love of her life, SSGT George T. Scott, on February 15th, 1958 and in 1967 moved with her young family to Travis AFB, eventually settling in Fairfield. Pat found lifelong friends as a long-time member of the English wives’ group, the Chatterbox Club, and during her 30+ years of employment at K-Mart. She was an accomplished knitter, welcoming many babies with her hand-made clothing and participating in the Linus Project providing blankets for newborns in local hospitals. She donated regularly to St. Jude’s Hospital. Truly a woman of conviction, Pat was a devoted wife, mother, grandmother, and great-grandmother, and a loyal friend. Her memory will live on in the hearts of those who knew her. Pat will be forever remembered by her brother Ian (Lesley) Roberts, sons Gene (Kira) Scott and Tracy (Jamie) Scott, grandchildren Jason, Stephanie, Samantha (Mike), Ian (Christian), Autumn, Tyler, Jake (Kendra), and Sarah, great-grandchildren Brent, Allyana, Kendall, Austin, Gavin, Kaila, Karma, Charlie, Ashlynn, Milo, and Kairi. She was preceded in death by her husband, parents, and brothers Derek and Alan. A service will be held at the Sacramento National Cemetery in Dixon on Friday, January 31, 2020 at 10:00 am, officiated by Rev. Karen Freeman. A celebration of life will be set at a later date. Memorial contributions may be made to St. Jude Children’s Research Hospital. Special thanks to the caring staff at the UC Davis Cancer Center in Sacramento and the NorthBay VacaValley Hospital in Vacaville.

The family of Patricia Ann Scott created this Life Tributes page to make it easy to share your memories.