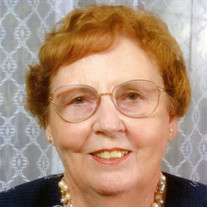 NORMA PERKINS ROGERS FEB. 22, 1921 – NOV. 9, 2019 Norma (Perkins) Rogers, of Fairfield, California, died on November 9, 2019 in a care facility in Merced, California. She was 98. Norma was born in Overton, Nevada, the youngest of 8 children born to George Perkins and Ethel Thomas. She spent her childhood in Overton, but after graduating high school, she left the small, rural community and moved to Los Angeles, where she found work in a model airplane factory. It was here that she became friends with a co-worker, John Barron Rogers, who would become her husband of 36 years. They married on July 4, 1941 in Las Vegas. When the U.S. entered the war in Dec. 1941, John served as an officer in the newly formed Army Air Forces while Norma got hired to work in a real aircraft factory. After the war, John began working for the L.A. Police Department, and they settled down to a regular home life, buying a home in the L.A. suburb of Northridge and welcoming two children into their family—Nancy Alane Rogers (later Darrington) and John Douglas Rogers. After John retired from the L.A.P.D. in 1966, they bought a home in Fairfield, CA, which Norma loved and where she lived until age and health required her to live in a care facility. Norma inherited a legacy of faith, hard-work, and humble sincerity from pioneer ancestors who had helped settle southern Utah and southern Nevada, and she exemplified these traits throughout her life. Her devotion to her faith and her family was both matter-of-fact and undeviating, and it provided a reassuring constancy to those she loved. Norma was a faithful member of The Church of Jesus Christ of Latter-day Saints all her life, and she served tirelessly in many voluntary capacities in the Church. Musically inclined, she learned the piano and trombone as a child, and after they moved to Fairfield, Norma learned to play the organ (mostly self-taught) and thereafter played for weekly church services for multiple decades. In addition to spending many years researching and documenting her own family history, she spent countless hours laboriously transcribing handwritten records microfilmed by the Church to enable others to be able to discover their own family histories. Besides being hard-working, Norma was bright and creative. She loved to read, and fostered that love in her children and grandchildren. She enjoyed traveling and did so frequently with her sister Marie, who lived nearby in Fairfield, especially in the long years after John’s death in 1977. Norma was a wonderful cook and made delicious old-fashioned candies and creams, to the great delight of her grandchildren when she’d come visit at holidays. Norma was also a gifted quilter and embroiderer, and she made numerous handmade quilts that she gave to her family and others. Though they were beautiful works of art, in typical fashion she always insisted they were to be used, not just looked at. Norma’s life was characterized by a generous disposition, always quiet and unassuming—a handmade quilt, an unexpected check, a heartfelt letter, her loving acceptance. Norma is survived by her son, John D. Rogers, and by six grandchildren—Joel Darrington (wife Sarah), J.J. Darrington, Jeremy Darrington (wife Ann), Jennifer (Darrington) Johnson (husband Cavanaugh), Jordan Darrington, Jacob Darrington (wife Erin)—and by 15 great-grandchildren. Norma was preceded in death by her husband John, daughter Nancy, and son-in-law Darrell Darrington. A funeral service will be held at The Church of Jesus Christ of Latter-day Saints, 2700 Camrose Avenue, Fairfield, California, on Monday, November 18, 2019 at 11 AM. The interment will be at Suisun-Fairfield Cemetery, 1707 Union Avenue, Fairfield. In lieu of flowers or gifts, the family would appreciate donations made in Norma Rogers’ name to Latter-day Saint Charities at www.latterdaysaintcharities.org.

The family of Norma P. Rogers created this Life Tributes page to make it easy to share your memories.

Send flowers to the Rogers family.