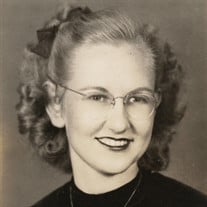 Mildred (Midge) Ruth Brown was born August 23, 1921 in Danville, Illinois, to Paul and Gladys Brown. She passed away almost a century later on June 6, 2021 and is survived by her sister Margaret (Boots) Gould, daughter Stephanie Marsh, grandchildren Heather Marsh and Sean Marsh and many nieces and nephews whom she loved dearly. The oldest of four daughters, Midge adored the outdoors. She often spoke of family camping trips as a child and of being a bit of a tomboy saying, “I was the closest Dad ever got to having a son!” From a very young age, she felt a deep sense of responsibility toward her younger sisters and by the age of 12 was already doing most of the driving when she and her mother and sisters would venture off across the country to visit friends and family. Midge graduated high school at the age of 16, enrolling in Taylor University in Upland, Indiana the next fall. She graduated from Taylor in 1942 with degrees in both English and Home Economics. While there, she worked in the dining hall to help with expenses and participated in the drama club. It was also there that she first met her future husband and lifetime partner Phil Yaggy. Phil was dating one of her friends at the time but Midge and Phil were destined to be together. The two were engaged by the time Phil graduated in 1941—he wasn’t about to leave her behind without a ring on her finger! As fate would have it, Phil was drafted later in 1941 making Midge’s dream of a big family wedding the next year impossible. With the uncertainties of war and a determination born of their love for each other, the couple persistently petitioned Midge’s father to allow her to travel to Salt Lake City where Phil was stationed so the couple could be married. He finally agreed and the marriage was performed on December 2, 1942 by the base chaplain. They celebrated 76 years of marriage together before Phil passed away in 2019. After the war, Phil and Midge moved to Michigan where they both taught high school and in 1951, they welcomed their daughter Stephanie. During this same time, Phil had reenlisted in the Air Force and Midge began to embrace her new life as an officer’s wife. Military life agreed with her and she and her young family enjoyed assignments both overseas and in the US. Midge always described herself as her mother’s daughter, her husband’s wife and her daughter’s mother. She never seemed to truly understand how important she was to those who loved her. She was the heart and the anchor of the family. Home was wherever she was—no matter where in the world that might be. While posted in France and Germany, she made it her mission to visit as many other countries as possible on weekends and vacations. There wasn’t a castle she overlooked nor a historical marker she didn’t follow. Her favorite assignment of all came when the family was transferred to Japan. She had long had an appreciation for Asian culture, art and beauty and finally she was able to experience it first-hand! Castles were replaced by palaces, pagodas and gardens and she happily immersed the family in the local culture with lessons in Japanese, traditional Japanese dance, flower arranging and doll making. She volunteered at the local high school teaching English and made many close associations within the local community surrounding the base. Once back in the States, Midge went to work for Allstate Insurance Company becoming one of their first female underwriters. After retiring, she and Phil fulfilled a life-long ambition by designing and building their dream home on an acre in Penn Valley, California within the gated community of Lake Wildwood. Their roots firmly planted for the first time as a married couple, they enjoyed living there for 20 years. They were active members of the community participating in many of its clubs and social activities. Never one to sit idly by, Midge also ran for election and was voted onto the community’s Board of Supervisors, eventually taking on the position of President of the Board. Life was truly idyllic during those years in Penn Valley but health and age eventually forced the couple to reconsider their future. After two back surgeries for Midge and a fall from the roof at the age of 80 for Phil, they decided it was time to once again make some changes. They moved to Fairfield in 1998, becoming residents of Paradise Valley Estates, a retirement community primarily for retired military personnel and enjoyed their final 20+ years with old and new friends, some of whom they had met previously in their years as a military family and others with whom they shared many common experiences. Phil passed away in January of 2019 and as both dementia and physical deterioration had been slowly claiming her life, Midge followed peacefully two and a half years later with her daughter by her side. We would like to thank, from the bottom of our hearts, all the staff at Laurel. When COVID prevented us from being with Midge, you provided the care, the compassion and the love that we couldn’t. Your support for our little family is appreciated more than you will ever know… In lieu of flowers, the family asks that you consider a gift in Midge’s memory to Taylor University. Checks can be mailed to: Taylor University In Memory of Mildred ‘Midge’ Yaggy 236 West Reade Ave. Upland, IN 46989 For online gifts, visit http://www.taylor.edu/giving. There’s a drop-down menu to designate the gift in her honor.

The family of Mildred Ruth Yaggy created this Life Tributes page to make it easy to share your memories.

Send flowers to the Yaggy family.