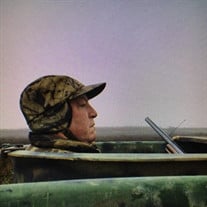 Michael James (Mike) Magee of Fairfield, California, passed away on February 7, 2020, at the age of 73. Born to Evelyn Elizabeth Magee (nee Reisdorfer) and James Hugh Magee, he grew up in Fairfield, CA, with his 5 siblings. He attended Holy Spirit Catholic Elementary school, graduated from Armijo High School and completed the 1965-66 school year at Napa Junior College. Mike then served six years in the Air Force Reserves from 1966 through 1972, receiving an Honorable Discharge at the rank of Technical Sergeant (E6). Among these years, he also served on the Suisun City Volunteer Fire Department. For the next several years, he combined his passion for the outdoors with his work, first as the onsite maintenance/manager of the St. Germain Hunt Club (1973-75), followed by working for the California Dept. of Fish & Game at nearby Grizzly Island Wildlife Refuge (1975-76). Changing career course, Mike did a stint with Explosive Technology, Inc. (1976-77), followed by 18 years at the Mare Island Naval Shipyard, ultimately as a Shipfitter Lofter. He retired in 1996 just as the doors were closing on the Shipyard’s 142 years of service to America. Throughout his life, he was able to remain an avid hunter and fisherman, and he raised and nurtured a series of loyal hunting dogs. Nearly up to his final days, he devoted time and energy to the maintenance and use of his beloved Duck Club, the M.G.M. (Magnificent Golden Mallard) Club. Mike Magee is survived by his sisters Patti O’Shea, Peggy McMillen, and Janice Altomare (and her husband Mike), his brothers Mark Magee (and his wife, Mary) and Jerry Magee (and his wife, Judy), eight nieces and nephews (who fondly remember him using his Donald Duck voice), and seven grand nieces and nephews.

Michael James (Mike) Magee of Fairfield, California, passed away on February 7, 2020, at the age of 73. Born to Evelyn Elizabeth Magee (nee Reisdorfer) and James Hugh Magee, he grew up in Fairfield, CA, with his 5 siblings. He attended Holy... View Obituary & Service Information

The family of Michael James Magee created this Life Tributes page to make it easy to share your memories.

Send flowers to the Magee family.