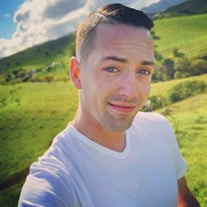 Mathew Clark Chambers, (born in Ft Lauderdale, May 24, 1996), passed away on June 7th at home in Fairfield. Born to Stewart and Lynn (Ansbro) Chambers, he came back to Fairfield, his mother’s hometown, at the age of four. Matt was an avid Star Wars series aficionado with a keen knowledge of its trivia and movie dialogue. Like many in his generation he was passionate about video games and shared his passion with online friends. A talented pianist, he would often play his rendition of John Lennon’s Imagine, his mother’s favorite. He also enjoyed spending time at the family cabins in northern Colorado. While attending Armijo High School, he loved being on the water polo team. He attended Solano Community College where he appreciated his teacher and classmates in his EMT classes. He worked as a server in local restaurants, including Downtown Joe’s in Napa where both customers and employees enjoyed his jovial and humorous attitude. Following his dad’s death when Matt was just shy of his 10th birthday, he bravely became ‘the man of the house’ and was a caring support to his mother. Fortunately for Matt, his beloved grandfather, Mathew Ansbro was his guiding light for the next several years. Matt was a kind and generous soul – charming, polite, caring, and affable with all he met; he went out of his way to assist anyone in need. He is survived by his mother, Lynn; his Aunt Susan and Uncle James; Aunt Stacy and Uncle Jeff; Uncle Cark and Aunt Debbie; cousins Hanna, Erica and Carrie, and many friends. He will be greatly missed but will live in our hearts forever. Services will be held on Thursday, June 17th at 10 am at Bryan-Braker Funeral Home (1850 West Texas St, Fairfield; 707-425-4697). In lieu of flowers, optional memorial offerings may be made to Habitat for Humanity, 5130 Fulton Dr. Suite R, Fairfield, 94534. www.solanonapahabitat.org Arrangements are under the care of Bryan-Braker Funeral Home, 707-425-4697. You may sign the guestbook at www.bryanbraker.com

Mathew Clark Chambers, (born in Ft Lauderdale, May 24, 1996), passed away on June 7th at home in Fairfield. Born to Stewart and Lynn (Ansbro) Chambers, he came back to Fairfield, his mother&#8217;s hometown, at the age of four. Matt was an... View Obituary & Service Information

The family of Mathew Clark Chambers created this Life Tributes page to make it easy to share your memories.