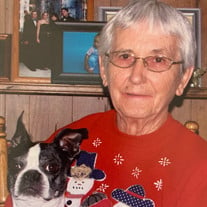 Mary Frances Peter January 15, 1930 – July 27, 2020 Mary Frances Peter, 90, passed away Monday, July 27, 2020 at The Village at Rancho Solano, in Fairfield, California. Mary was born January 15, 1930, in Bowen, Illinois to Charles and Adelaide Winfield. She married Gerald Peter on March 31, 1950. They met while both working together in Quincy, Illinois at Ely Walker. He joined the Air Force and they began their life together traveling and living stateside and abroad. They were stationed in Kentucky when they had their first son, Charles. Then off to England where they had two daughters, Susan and Peggy. After three years in England, they were bounced around and landed in Florida where their second son, Douglas, was born. They loved Florida and enjoyed the beautiful weather, good friends, boating, and water skiing for 5 years. They loved to enjoy their extended family that could come from Illinois and Missouri to spend time and they also took many road trips to visit in return. They were surprised to receive orders for a three-year tour to France where their third daughter, Michelle, was born. While in France, they traveled all over Europe with their kids in a Plymouth station wagon equipped with one of the first overhead campers, one that her husband designed and built himself. The final destination as an Air Force wife was Travis A.F.B. After their 20 years in the service, Mary and her husband enjoyed belonging to an antique car club. They bought an RV and made a yearly trip to Yosemite with over 40 friends and family. Their children all married and had children of their own. Mary spent her time with her family and friends doing what she did best… being a homemaker. They built a home in Tolenas and continued to have family gatherings and enjoy their life together. They were members of Holy Spirit Catholic Church and were instrumental in the building of Mount Carmel. After the death of her husband, Mary had almost 20 years left and she continued with her church, her family, and her friends. She had her beloved Boston Terrier, Arnold, as her trusty companion. Mary always looked forward to taking trips back to visit her sisters and extended family accompanied by her daughters and granddaughters. She loved a trip to Reno, Tahoe, or Cache Creek to play the slots. Mary and her circle of friends continued their weekly Tuesday jaunt to Murillos. Their table was saved and their waitress knew their order from being loyal customers. Mary’s Pizza Shack had her favorite order ready for her every Friday where she was joined by her kids, grandkids, and in-laws. She loved her weekly breakfasts at Babs Diner. Mary was known for her sense of humor. She loved nothing better than a raunchy birthday card, whether it was being sent by her or received. She loved to laugh and she built a family that surrounded her until her very last day on earth. She is survived by two sons, Chuck (Susan) Peter and Doug (Lori) Peter; three daughters, Susan (Art) Garben, Peggy (Joe) Andrews, and Michelle (Jeff) Andrews; 14 grandchildren; 12 greatgrandchildren; numerous nieces and nephews; her sister, Charlene Sutter from Taylor, MO; sister-in-laws, Carol (Gary) Darnell; Anne (Harold) Winfield of Quincy, and Barb (Dave) Grawe of Kansas City, MO. She was preceded in death by her parents; husband, Gerry; three brothers, Harold, Floyd, and Don; and her sister, Shirley. A graveside service will be held on Thursday, August 6, 2020 at 10:00 am at St. Alphonsus Cemetery, 1801 Union Ave., Fairfield, CA. Arrangements are under the care of Bryan-Braker Funeral Home, 707-425-4697. You may sign the guestbook at www.bryanbraker.com.

The family of Mary Frances Peter created this Life Tributes page to make it easy to share your memories.

Send flowers to the Peter family.