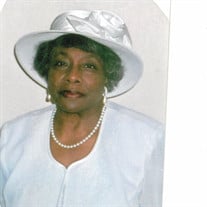 On Saturday, October 6, 1934, God decided to gift to Ellis Pearson and Mary Anderson, a baby girl. That day, in Shelby, MS they chose to name her Mary. She was the twelfth of fifteen siblings. She received her education in Desha County Training School in McGhee, AR. She graduated at the top of her class and was honored as Valedictorian at her graduation ceremony. She later earned an AA degree in Early Childhood Education from Contra Costa Community College in Richmond, CA. She married the love of her life, Eric Joe Langston on November 30, 1953, in McGhee, AR. They would later relocate to Richmond, CA. To this union, God entrusted the care and nurture of six children: Bonnie Jean, Marianita, Zuretta Jenicer, Eric Joe, Jr., Montoya and Mark. She accepted Christ as her personal Savior at an early age and united with the True Vine Baptist Church of McGhee, AR. After the family relocated to Fairfield, CA, she united with Mount Calvary Baptist Church in 1979 under the pastorate of the late Rev. Claybon Lea. She was an active member of her local church as well as denominational activities, such as: Ministers Wives; Sunday School, Girls in Action, Vacation Bible School, and Women’s Missionary Union. She enjoyed being with friends, sewing, reading and discussing the Bible. She loved working with children. She worked as a Pre-school teacher at Kinder Care in Fairfield, CA. She always sought to provide the children with her very best. She was preceded in death by both parents, fourteen siblings, and two daughters. She leaves to cherish her memory, her husband, Rev. Eric Joe Langston of Fairfield, CA; children: Bonnie Jean Blankenship of Woodland, CA, Eric Joe (Carol) Langston, Jr. of Fairfield, CA, Montoya (Melissa) Langston, and Mark (Susan) Langston of Vallejo, CA; grandchildren: Jarrett, Marne and Damani, Cicely, Akina, Moniqueca, Montae, Jeremiah, Nathaniel, Michael and Brandon; seven great-grandchildren, and a host of other extended family and friends. Her favorite scripture was “I can do all things through Christ, who strengthens me.” Philippians 4:13 Here is the link to join Mary Langston's service via Zoom on March 2nd. The zoom will start at 9:45 am. The passcode is 1234. https://us02web.zoom.us/j/82921158657?pwd=eUVIUWh3ekNDUll1aEg5bTJLRm9JQT09

On Saturday, October 6, 1934, God decided to gift to Ellis Pearson and Mary Anderson, a baby girl. That day, in Shelby, MS they chose to name her Mary. She was the twelfth of fifteen siblings. She received her education in Desha County Training... View Obituary & Service Information

The family of Mary Langston created this Life Tributes page to make it easy to share your memories.

Send flowers to the Langston family.