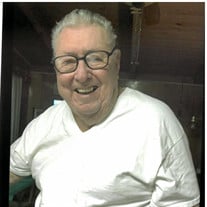 MARVIN L. JONES Feb. 15, 1931 - June 30, 2021 Marvin Lee Jones, 90, passed away Wednesday June 30, 2021 in the Fairfield, California. Marvin was born Feb. 15, 1931 in Holtville, California. The second oldest of seven siblings to parents, Joseph and Lucy Jones. Marvin has been a longtime resident of Fairfield since 1937. The family relocated to Solano County, spending some years in Birds Landing before settling in Suisun Valley. He attended Gordon Valley School, Fairfield Grammar School and Armijo High School. On June 8, 1952 he married his high school sweetheart, Shirley Siqueira; they were happily married for 69 years. Marvin proudly served in the United States Navy during the Korean War from Oct. 29, 1951 to Oct. 29, 1955. Marvin worked for the United States Postal Service as a postal clerk from 1956 to 1978. He also worked on Mare Island at the Naval Ship Yard as an electrician for a private contractor from 1979 until his retirement in December 1993. Marvin enjoyed many things in life. He really loved nature and being outdoors, he enjoyed trout fishing, deer hunting. He loved watching air shows and parades. He truly loved spending time with his family. Marvin is survived by his wife, Shirley; daughter, Pamela of Fairfield; sons, David and wife Mary Jones, and Patrick Jones of Fairfield; brother, Joseph (Babe’) Jones of Suisun Valley; sisters, Mary Barker of Fairfield, Yvonne and Al Newkirk of Darby, Montana; sister's in-law, Clara Jones of Suisun, and Mae Jones of Vacaville; 11 grandchildren; 13 great-grandchildren; and six great-great-grandchildren; as well as many nieces and nephews. He was preceded in death by his mother, Lucy; father, Joseph Jones; and brothers, Bill, Jay and Bob Jones. Viewing will be held from noon to 4 p.m. Wednesday July 14, 2021, at Bryan-Braker Funeral Home, 1850 W. Texas St., Fairfield. Burial, with military honors will be held at 11 a.m. Thursday, July 15, 2021, St. Alphonsus Catholic Cemetery, 1707 Union Ave., Fairfield. In lieu of flowers, memorials may be made to your favorite charity. Arrangements are under the direction of Bryan-Braker Funeral Home. 707-425-4697.

The family of Marvin Jones created this Life Tributes page to make it easy to share your memories.

Send flowers to the Jones family.