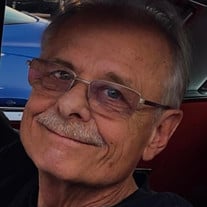 Mark Steven Behm,71, passed away Sunday, February 28th 2021, surrounded by his family. Mark was Born March 3,1949 in Baldwin, Wisconsin to Wallace and Vivian Behm. He Married the love of his life, Loretta Behm, April 26,1968 in San Francisco. Mark worked several jobs as a young man such as the family gas and service station and a cabinet maker. He retired from Bob Rich Schroeder Trucking in Hayward (Roadstar in later years) after 30+ years. Mark loved being with his wife and making her happy, taking her on road trips on the Harley with friends. They would often sneak off to get SOUP at the casino. He enjoyed working on cars and a good car or bike show. He also enjoyed spending time with his children, grandchildren and great grandchildren, all of which he was proud of. He always brought life to the party with a huge smile and a funny joke. He would do anything for anyone without any questions. He is greatly loved by all and will be missed deeply. He Served in the US Army as a Sergeant during the period of Vietnam War (1970-1972) and earned a Bronze Star for Meritorious achievements in ground operations against hostile force. Mark is survived by Daughter, Tammie; Daughter, Lorrie; son, and daughter in-law Mark and Delia; and daughter and son in-law Gina and Carlos of Fairfield. 4 grandchildren Samantha, Stephenee, Savannah, Alanah, and 8 great grandchildren James, Jaxon, Lucas ,Edwin Jr., Loretta Rain , Sage , Mary and Oliver. May he now be at peace with his late wife Loretta Behm and parents Wallace Behm and Vivian Reyna.

The family of Mark Behm created this Life Tributes page to make it easy to share your memories.

Send flowers to the Behm family.