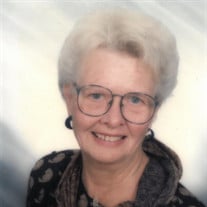 MARILYN J. LAVOIE Aug. 17, 1930 — March 6, 2020 Marilyn was born Aug. 17, 1930 to Elmer E. and Thelma M. Brown in Arcadia, California. She resided in Arcadia for 21 years and moved to Solano County in 1951. She moved to Fairfield in 1963 and lived until her passing on March 6, 2020. Marilyn graduated high school in 1949 in Monrovia, California and married in 1949 where she became a mother and house wife. Marilyn’s hobbies included gardening and traveling. She was the first President of Ladies of the Elks in 1965 and part of the Holy Spirit Mother’s Guild. She is survived by her daughters, Kerry Waldthaler, of Fairfield, Kathy Fish, of Oregon; son, Kurt Black, of Fairfield; grandchildren, Kandace and Ken Waldthaler, Brandi Fish, Michael Fish, Kacey Ramos, Katie Black; and great-grandchildren, Kayle and Kurt Ramos, Kodi and Skylah Fish. Marilyn is preceded in death by her husbands, Lloyd Black and Albert Lavoie. Services are being postponed at this time. In lieu of flowers, contributions can be made to Continuum Hospice Care, www.continuumhospice.com Arrangements under the care of Bryan-Braker Funeral Home, 707-425-4697, www.bryanbraker.com

The family of Marilyn J. Lavoie created this Life Tributes page to make it easy to share your memories.

Send flowers to the Lavoie family.