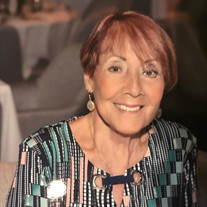 On December 9th, 2019 a bright light stopped shining. Maria Dolores Henderson who, for 83 years, brought joy and laughter into the lives of everyone she met, passed away in her sleep at her home in Fairfield, California. Lolita, as she was affectionately known, was born on September 9th, 1936 in Madrid, Spain, the second born to Manuel Caldeiro and Dolores Fernandez. As the middle child of three inseparable sisters, her playful nature was the glue that made their bond so tight. So tight, in fact, that eventually all three sisters ended up marrying Airmen and moving within five minutes from each other in Fairfield, CA. Darrell Henderson was the lucky fella who got to put a wedding ring on her finger in April 1962. Not long after, they adopted a little boy in Germany and their home and hearts were overflowing with love. Reinhard adored his mother and Lolita beamed with the happiness only a mother can understand. With her sisters close at hand she thrived at being a mother and a homemaker. She tended to her home with love and laughter, cooking her legendary Spanish dishes and tending to the flowers in her garden. She loved exercising and shopping for the latest fashions. You couldn't catch her in anything other than high heels! With her effervescent personality, Lolita made friends everywhere she went. Now that she has passed, she is reunited with those loved ones and friends who left before her and is probably making them laugh this very moment. She lost her son and husband too early. She lost her sister, Manuela and her dear friend, Jurgen recently. Through all of her loses she never lost the ability to make others smile. For those of us left bereft of her presence, her sister Carmen will miss her most of all. She is survived by her sister Carmen (Ron) Hulett, her nephews Robert (Alicia) Hulett and Ryan (Lynn) Caldeiro, many cousins back home in Spain, and her great nieces and nephew Maya, Lucas and Esmé which were like her own grandchildren. Memorial Mass services will be held Wednesday, January 22 at 11:00,at Our Lady of Mount Carmel Church in Fairfield, California. Arrangements under the care of Brayn-Braker Funeral Home, 707-425-4697, www.bryanbraker.com.

On December 9th, 2019 a bright light stopped shining. Maria Dolores Henderson who, for 83 years, brought joy and laughter into the lives of everyone she met, passed away in her sleep at her home in Fairfield, California. Lolita, as she was... View Obituary & Service Information

The family of Maria Dolores Henderson created this Life Tributes page to make it easy to share your memories.

Send flowers to the Henderson family.