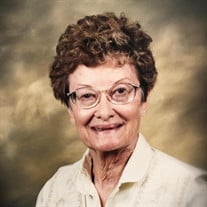 MARGARET HEINS December 11, 1929 - February 5, 2021 Margaret Nell Heins, 91, passed away Friday, February 5, 2021, at Lily's Care Home in Fairfield, California. Margaret was born December 11, 1929 in Wichita, Kansas, to Ira B. Mosley and Marion I. (Niederlander) Mosley, and raised in Kansas and California. She was married to Daniel R. Heins in August 1956. Margaret had a rich life and full career as a music educator in Fairfield. She first taught music in Fairfield schools, subsequently taught piano and voice privately, and finally worked as a violin teacher and director of Solano Suzuki Strings from 1978 to 2006. She was an active member of St. Mark's Lutheran Church, and worked in church music ministry, conducting choirs at the Community United Methodist Church and subsequently at St. Mark's, where she served as the Music Director. She participated in and actively supported many other local musical organizations over the years, including the Solano Symphony Orchestra. Margaret will be sadly missed by her sons Karl of Oakland, California (Carolien Jungerling-Heins), Mark Daniel of Davis, California (Sherry Heins), and John of Arlington, Virginia (Margaret Gonglewski), by her daughter Marion of Clackamas, Oregon, and by two grandchildren, Dylan and Rylan of Davis. She was preceded in death by her husband Daniel R. Heins, by her parents, and by two brothers. A memorial service will be held at a later date due to Covid-19. Inurnment will be next to her husband and near her parents at Fairmont Memorial Park in Fairfield. The family would like to thank Lily Bonifacio and her staff at Lily's Care Home in Fairfield for the excellent care Margaret received during her stay. In lieu of flowers, donations in her memory can be made to St. Mark's Lutheran Church in Fairfield (https://www.stmarksfairfield.org/) or to the Solano Symphony Orchestra (https://www.solanosymphony.org/). Arrangements are under the care of Bryan-Braker Funeral Home, 707-425-4697. You may sign the guestbook at www.bryanbraker.com.

The family of Margaret N. Heins created this Life Tributes page to make it easy to share your memories.

Send flowers to the Heins family.