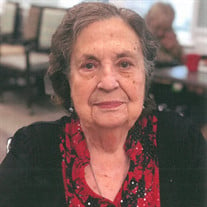 MANUELA EMTER January 11, 1932 — July 15, 2019 On Monday, July 15, 2019, our beloved matriarch, Manuela Emter, passed away peacefully at the age of 87 in Vacaville, California. Manuela was born on January 11, 1932, in Madrid, Spain to Manuel and Dolores (Fernandez) Caldeiro. With the passing of her mother at a young age, Manuela, the eldest of three sisters, was pressed into the role of caretaker for her younger sisters. This early responsibility helped shape her personality into the reliable rock of the family that she became. In 1963, Manuela married Raymond Emter of the USAF. In 1967, they made Fairfield, California their home. Manuela was a devoted member of Our Lady of Mt. Carmel Church in Fairfield. She was enthusiastic about her many hobbies including painting, quilting and sewing, but more than anything she loved her dogs. Sheeba, Tascha, Novo and Fergie were the furry recipients of lots of snacks and tons of her love. She is survived by her adoring sisters, Maria Dolores Henderson and Maria Carmen Hulett. Services will be held at 11:00 AM on Tuesday, September 3, 2019, at Our Lady Mt. Carmel Church, 2700 Dover Ave. in Fairfield. Following the service, a Military Committal will be held at the Sacramento Valley National Cemetery, 5810 Midway Road in Dixon. Arrangements are under the care of Bryan-Braker Funeral Home, 707-425-4697. You may sign the guestbook at www.bryanbraker.com

The family of Manuela Emter created this Life Tributes page to make it easy to share your memories.

Send flowers to the Emter family.