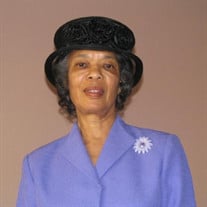 Mae Ethel (Hudson) Jones was born on Aug. 24th, 1939 to Ethel Mae (Honor) Hudson and Leotha Hudson in Canton, MS. She was the eldest of four children, Leotha Hudson Jr, Ella Mae and Clifton Earl. Mae met the love of her life, Albert L. Jones, in 1956 at his Jr/Sr prom, during their junior year in high school. Al proudly returned to the Jr/Sr prom the following year, with Ms. Mae Hudson on his arm! Mae graduated from Oak Park High School in Laurel, MS in 1957 and remained an active member of the Northern California Chapter of Oak Park Alumni. Mae was an adventurer. She lived and worked in Chicago, IL for a little over a year before getting married. Al and Mae were joined in marriage on Oct. 25th, 1959 and began their life as a military family. Together they travelled the world. Their first assignment was in Santa Maria, CA. They lived in Santa Maria for about 2 years and their first daughter, Sherry, was born. Mae returned to Gulfport, MS, while Al went to France on assignment. After Al returned to the United States, the family was united together in Wichita, KS at McConnell Air Force Base. The family lived in Wichita for about 7 years and their 2nd daughter, Carla, was born. The next assignment took the family to Kerpen, Germany for about 3 years, and their son, Alan, was born. The family was then transferred to Travis Air Force Base, in Fairfield, CA. In planning for retirement, the family moved to Vacaville, while Al finished his time in the service. With every assignment, Mae and Al made it a priority to find a church home where they could actively serve and worship The Lord. Their faith was one of the cornerstones of their marriage, which lasted for over 61 years until she was called home to glory. Mae was the true example of a Proverbs 31 woman. She fiercely loved God, her family, her friends, her church, and her community. She was selfless, putting others first, always willing to share her faith, good food and to give a helping hand. Mother Mae served as the Chairperson of the Mothers Ministry, an active member of the usher board and a Deaconess at Shiloh Baptist Church in Vacaville, CA. Al and Mae have worshipped at Shiloh since 1980. Mae is the beloved mother of Sherry E. Jones, Carla D. Jones and Alan L. Jones, grandmother to Nicholas A. Jenkins and great grandmother to Jalen A. Jenkins. Nick started coined the name “Grammy” and the family followed suit. A few years ago, Mae’s grandson, Nick, asked her to write down 10 things she had learned in life. We want to share her words of wisdom with you. The list represents how she lived life and the ideals she instilled in her family. Grammy, WE thank God for the time we had with YOU. WE miss YOU dearly. Love, YOUR Family 😊

The family of Mae Ethel Jones created this Life Tributes page to make it easy to share your memories.

Send flowers to the Jones family.