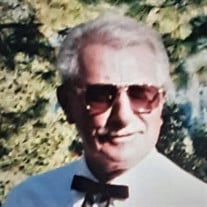 Lyn "Ski" Pratt passed away on May 29th, 2021, at his son's residence in Fairfield, CA after a short fight with cancer at the age of 85. “Ski” was born August 14, 1935, to Orson Pratt and Helene Bettencourt in Colfax, CA. He lived and went to school in Colfax until he joined the U.S. Army in 1954, where he served for 2 years in Puerto Rico until 1956. When he returned home to Colfax after the Army, he worked for CA Department of Forestry (CDF) as a Firefighter. He worked for CDF for over 30 years, where he retired as a Battalion Chief in the Tuolumne Calaveras Unit. He married Geneva Andersen-Pratt in 1956 who he had three children with; Kristine Pratt-Seibel, Valerie Pratt, and Dennis Pratt, all who is survived by. He is also survived by his six grandchildren, six great-grand children (soon to be 7) and many nieces and nephews and their families. He later married Chloe Cook-Pratt in 1977, who he was married to for 40 years until she preceded him in death in 2017. He was also preceded in death by his stepson Dale Johnson and his brother Dean Pratt. “Ski” loved his many years working for CDF, trains, camping, music, playing in a country music band with his bass guitar, working outside in the yard on his ranch, tractors, and his many dogs over his lifetime. He was a very hard worker, fun, good sense of humor, and very meticulous in everything he did. "Ski" loved his family very much and cherished his friendships. A Celebration of Life will be held on Saturday August 14th, 2021, from 11-3pm at the Veteran's Memorial Building located at: 427 Main Street Suisun City, California.

The family of Lyn William Pratt created this Life Tributes page to make it easy to share your memories.

Send flowers to the Pratt family.