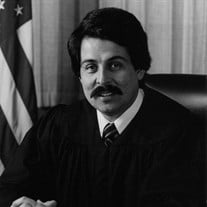 Judge Luis Mario Villarreal passed away on Wednesday, July 22, 2020 in San Antonio, Texas. He was born on October 13, 1949 in El Paso but spent most of his adult life in Northern California, before retiring to San Antonio, Texas. Judge Villarreal was a brilliant individual with a witty sense of humor. From his early years as a young boy through his teenage years and early adulthood, Judge Villarreal was a stellar, natural athlete and played organized sports in football, basketball, baseball, and softball. Although gifted and tenacious in all sports, his most passionate sport was baseball/softball where he excelled as a third baseman and always batted either 3rd or cleanup. His professional sports idols growing up were Mickey Mantle, Willie Mays, and Brooks Robinson, among others. Unable to compete in collegiate sports due to academic, family, and work priorities, Judge Villarreal enrolled at the University of Texas at El Paso and ultimately earned a Bachelor’s degree in political science. He forever remained a proud "Miner" throughout his life. Later in life, Judge Villarreal took up the game of golf and became an avid, fiercely competitive golfer and enjoyed spending time with friends on the course. Prior to his acceptance into law school, Judge Villarreal was especially proud of his brief service in the United States Marine Corps where he was accepted into the arduous and competitive Marine Corp Officer Candidate School pilot training program where he trained in Quantico, VA. Shortly after completing bootcamp in Quantico, Virginia, Judge Villarreal received a full scholarship offer to attend the University of San Francisco School of Law in 1972. Law was always his career passion, so he immediately made plans to relocate his family from El Paso to the Bay Area to study and earn a law degree. While studying law, Judge Villarreal worked full time in a variety of jobs to help support his family. After graduating from USF School of Law with honors, he accepted a Reginald Heber-Smith fellowship in Legal Aid services in Vallejo representing indigent defendants in civil cases. He then joined the Solano County Public Defender’s office representing defendants in both misdemeanor and felony cases. In 1978 at the age 30, Judge Villarreal began a private law practice with Denis Honeychurch and Anthony Finkas, which became one of the most successful and respected criminal defense firms in Northern California. Judge Villarreal was first appointed to the Municipal Court by Governor Edmund G. Brown, Jr. in 1982 at the age of 32, then the youngest appointed judge in the state of California and the first Hispanic judge in Solano County. He became a Superior Court Judge after the reorganization of the bench and won re-election to the bench in 2000 and remained on the bench until his retirement in 2005. Judge Villarreal was committed to both diversity and inclusion on the bench and bar and mentored many young lawyers and law students over the years. He contributed to many scholarship programs and established his own scholarship to ensure that low-income law students would be successful in law school and have resources to pass the California State Bar. He is survived by his daughter, Michele Villarreal, grandson Davis Villarreal McKinney, brother Daniel-Roy Villarreal and sisters Sylvia Villarreal Moreno and Rachel Villarreal. He is preceded in death by his father, Mario Manuel Villarreal and his mother, Estela Mendoza Villarreal. “Luis was always larger than life. As an athlete, lawyer or judge. When appointed by Governor Brown, he was the youngest judge in California and first Hispanic judge in Solano County. As a judge Luis was best known for settling the most difficult cases. Negotiations in his department were always something to look forward to and reminisce about later. His sense of humor and street smarts had a lot to do with that. We will all miss such a special person,” said Tony Finkas attorney and friend. "Luis Villarreal was a courageous Judge who gave many who appeared before him an opportunity for treatment and rehabilitation. He was tough but fair and did the right thing. Judge Villarreal was a wise and intuitive jurist who had the ability to accurately evaluate the cases that came before his court," said attorney and friend Denis Honeychurch in Fairfield, California. "Judge Villarreal grew up under challenging circumstances, but his common sense, intelligence, and sense of humor made him a successful lawyer and judge. He was an invaluable and insightful mentor and was a living example of what it means to be a respected and committed professional," said friend and attorney Luis Cespedes of Sacramento, California. “My dad was quick-witted, intelligent and passionate about his profession and helping people that found themselves in the legal system. He taught me the value of hard work, the importance of education and not allowing boundaries to get in the way of attaining my goals. He was loved and will be missed,” said his daughter, Michele Villarreal. “Luis was a fierce competitor in every single aspect of his life, and throughout his entire life until God finally called him home. I will always remember him as a mentor and a motivator, and a man who never took ‘No’ for an answer. He was an incredible sports trivia genius. May he rest in peace in the comfort and presence of Our Lord forever. I will truly miss him,” said his younger brother, Daniel Roy. Burial will be private at the Rockville Cemetery. Due to Covid-19, a “Celebration of Life” will be held at a later date.

The family of Luis Mario Villarreal created this Life Tributes page to make it easy to share your memories.

Send flowers to the Villarreal family.