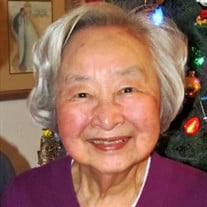 Linda Yuan, 92 years old, passed away on December 20, 2020 from a stroke. She was born in China to Professor and Mrs. Li Zong Tong, the oldest of six children. She graduated from Saint Johns University in China with a degree in Education. The family moved to Taiwan in 1949 just before the Communist takeover of Mainland China. While in Taiwan, Linda worked for the US Agency for International Development and made many life-long friends. Linda was married to Chia-Yao Yuan from 1952 until his death in 2004. Chia-Yao immigrated to the United States in 1957. Five years later, Linda and their two young daughters reunited with him in Renton, WA. They lived many years in Renton, WA and Idaho Falls, ID where she worked in various administrative positions. After retiring they moved to California to be close to their daughters. In retirement, Linda enjoyed traveling, especially trips to China and Taiwan where she was able to visit many parts of these countries that she had not been able to experience while living there earlier. She also enjoyed trips to other Asian and European countries and, of course, Hawaii. In addition, she volunteered at the local Senior Center Gift Shop and learned senior line dancing and Tai-Chi. Linda was a very independent person, always taking charge of what needed to be done. She was never lacking in showing concern for others and appreciation for others’ kindness towards her and her family. Her engaging smile lifted strangers and friends alike. All those who had the good fortune to be her friend or a part of her family admired her kindness, generosity, and selflessness. To many friends and family members, she was their “big sister”. She is survived by daughters Camille (Tom) and Simone (Ron), sister Shirley (Francis), nieces Annien and Sylvia (Charles), nephew Kris and several sisters-in-law, cousins, nieces and nephews in Taiwan and China. She also leaves behind her beloved feline companion Daisy. A private cremation was held. Given that COVID has adversely impacted so many people and in celebration of her life and selflessness, donations can be made to your favorite charity of choice to help others.

Linda Yuan, 92 years old, passed away on December 20, 2020 from a stroke. She was born in China to Professor and Mrs. Li Zong Tong, the oldest of six children. She graduated from Saint Johns University in China with a degree in Education.... View Obituary & Service Information

The family of Linda Yuan created this Life Tributes page to make it easy to share your memories.

Send flowers to the Yuan family.