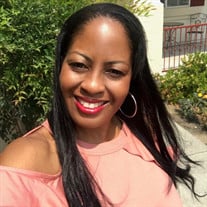 LaTanya Rene Moore Robinson On August 23rd 1974 Irma Lee Johnson and Ervin Moore were blessed by the birth of LaTanya Renee. LaTanya was the youngest of four children. LaTanya spent her early childhood in Richmond, CA where she attended Coronado Elementary School and Portola Middle School. In 1992, LaTanya graduated from El Cerrito High School as a proud Gaucho. After graduating high school, LaTanya continued her education at California State University Sacramento majoring in Sociology. While attending college, she began looking for employment and started working at The Money Store. This part-time job was the beginning of a distinguished 27 year career in the mortgage industry. It’s no surprise that LaTanya flourished in her career. She is naturally talented with strong organizational skills and a keen eye for detail. LaTanya has been a highly sought after professional in the mortgage industry and most recently was promoted to the Vice President of Real Estate at Travis Credit Union. Although LaTanya loved her job, it could not compare to the love she has for her family. She always had a strong bond with her parents, siblings and extended family members. So much so, that she could be considered a sister to all. In 1998, LaTanya met Andre Robinson and their lifelong journey of courtship began. LaTanya and Andre were married in 2006 and to this union two sons were born, Jayden and Jaelen. LaTanya was a woman of faith and was devoted to her Lord and Savior Jesus Christ. She was baptized at an early age at Pilgrim Rest Missionary Baptist Church, Richmond, CA under the leadership of Pastor C.E. Richardson. She later united with True Love Baptist Church under the leadership of Pastor Mervin Davis Jr. and continued to serve under Pastor Louis Ruffin III. LaTanya was active in many ministries of the church including the choir and served on the church Finance Committee. If there is one thing we can say about LaTanya, it is that she is a friend to everyone. LaTanya took great pride in developing relationships with others and always saying encouraging words. She was a mentor to many young professionals, coaching and advising them in their career. She was also heavily involved in her community and served on the board of sports organization and was a member of the Fairfield Chamber of Commerce. LaTanya was a ray of sunshine that touched many lives with the unique ability to make everyone feel special. Although she had an impeccable sense of fashion and style, her most beautiful accessory was her gracious smile that would often light up the room. And we cannot forget about her fur baby Paris who she carried around like a Pampered Princess. Although LaTanya will be missed by all, she leaves a legacy of beauty and love that will be cherished always. On Sunday, February 21, 2021, LaTanya departed this life and received her crown in glory where she was reunited with her mother, Irma Johnson; brother Larry Johnson and sister Carolyn Johnson. Left to cherish her memory are her husband Andre Robinson; sons Jayden and Jaelen; father Ervin Moore (Phyllis); brother Lavell (Monique) Johnson and a host of nieces, nephews, cousins and friends.

The family of LaTanya Renee Robinson created this Life Tributes page to make it easy to share your memories.

Send flowers to the Robinson family.