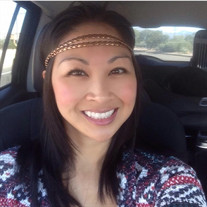 KIMBERLY ANNE LAGDAMEN Aug. 29, 1981- July 3, 2020 A beloved daughter, sister, niece, cousin, friend and mother, Kimberly Anne Lagdamen left this world age 38, on July 3, 2020. Born on Aug. 29, 1981 to Hernan and Tita Lagdamen, she spent much of her childhood in Fairfield, California, relocating to Las Vegas, Nevada briefly before moving back to her hometown. Kim, as she was affectionately called by many, was a vivacious and spirited individual, known both for her determination and inner strength, as well as her jovial nature. She cared deeply for her family and was a devoted mother to her only daughter, as well as a doting aunt to her many nieces and nephews. Many friends can attest to the fun times shared with her. She will be deeply missed by all those who knew and loved her. She leaves behind her parents; husband, Luis Caragan; daughter, Kiani; sister, Vanessa; brother, Jason; aunts, uncles and many cousins and friends. She was preceded in death by her grandparents, Carmelino and Lourdes Lagdamen and Hilarion and Amparo Cordero. Due to Covid-19 a modified memorial visitation will be held from 10:30 am to noon Thursday, July 23, 2020, at Bryan-Braker Funeral Home, 1850 W. Texas St., Fairfield. Guests will be asked to remain in their vehicles while paying respects to Kimberly and their condolences to the family. Funeral Arrangements are under the direction of Bryan-Braker Funeral Home, 707-425-4697. You may sign the guestbook at www.bryanbraker.com.

The family of Kimberly Anne Lagdamen created this Life Tributes page to make it easy to share your memories.

Send flowers to the Lagdamen family.