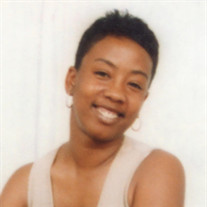 Kenesha Jackson left this earth too soon at the age of 36. She was born a firecraker on July 4, 1980 to Mark Thomas Jackson and Benaler Annette Jackson in Richmond, CA. At the age of four she moved to Vallejo where she spent her childhood and graduated from Hogan High School in 1998. After high school she went on to get her certificate in medical assisting from Silicon Valley College in Walnut Creek in 2000 and worked as a medical secretary at Rosmoor Medical Clinic in Walnut Creek. In 2007 she received her cosmetology license from Solano Community College. In addition she worked at San Quentin Prison as a medical secretary and was currently working at The Department of Rehabilitation in Napa as an office technician. Kenesha was very outspoken and that is what we loved about her. She was also a sweetheart. She would help anyone in any way that she could and gave good advice. She was a great artist drawing cartoon characters. She was the life of the party imitating and mimicking her family and friends with her funny laugh and great smile. She always had her favorite artists Tupac and Anthony Hamilton on her playlist. She was the family hairstylist which was her passion; braiding, cutting, and styling. And let's not forget she could throw down in the kitchen with her greedy self. Kenesha was a member of Bible Way Missionary Baptist Church in Richmond, CA. She was baptized in October 2015 by Pastor Nathan Wittom. Her favorite saying was, "Just give it to God." She was a great mother of three and made sure her kids had everything they needed. She is survived by her children Ayonna Denae Highbaugh, 14, Keylen Everett Highbaugh, 9, and Kiev Inez Highbaugh, 6; father and step mother Mark Thomas Jackson and Frances Jackson; sister, Davitra Ruthesia Jackson, brother, Carey Teon Brown; nephew, Teyon M. Brown; nieces Ni'sha M. Brown and Aniya M. Brown; Grandmother Earlie Mae Moore, and numerous aunts, uncles, and cousins. She is preceded by her mother, Benaler Annette Jackson, who went to be with the Lord on February 7, 2015. We love you Kenesha and you will live in us forever. Pallbearers James Hawkins, Dominic Jackson, Michael Jackson Jr., Keith Moore Jr., Travion Wright, and Ronney Richard Jr.

Kenesha Jackson left this earth too soon at the age of 36. She was born a firecraker on July 4, 1980 to Mark Thomas Jackson and Benaler Annette Jackson in Richmond, CA. At the age of four she moved to Vallejo where she spent her childhood and... View Obituary & Service Information

The family of Kenesha Ayonna Jackson created this Life Tributes page to make it easy to share your memories.

Kenesha Jackson left this earth too soon at the age of 36.
She...

Send flowers to the Jackson family.