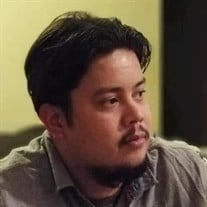 Justin Wayne Wilkinson, 30, passed away on Sunday, January 19th in Fairfield. Justin was born on June 7th, 1989 in Santa Ana, California, son of Timothy and Lilian (Laderas) Wilkinson. He joined the United States Navy shortly after graduating from Rodriguez High School, Fairfield, in 2007. He served proudly from 2007 to 2013 as a Master-at-Arms and was a 2nd Class Petty Officer by the end of his enlistment. During this time, while serving in Rota, Spain, Justin met his wife, Stephanie Kern. They were married February 2nd, 2010 in Fairfield, CA. Their son, Haiden Lyle Kern Wilkinson was born that same year in Rota, Spain. Justin also served in the United States Army Reserve for a few years after returning to California. He held a variety of jobs, primarily as a motorcycle mechanic and he was also attending Universal Technical Institute, learning Collision Repair. He loved his family and he was particularly fond of his niece and nephews. He had a wonderful, quirky sense of humor and an infectious smile. His passion was motorcycles and he was a member of the Rogue Militia Motorcycle Club in Fairfield. A great group of men who were always there for him and for Justin’s family. He is survived by his wife Stephanie (YN2, USN) of Rota, Spain, their son Haiden also of Rota, his parents, Tim and Lilian of Suisun City, a brother, Timothy Ian and his wife Sarah (Crosby) of Rio Vista, a brother Charles Ryan of Suisun City. Also his 2 nephews and neice, Jaxon, Corbyn and Dakota. Grandparents, aunts and uncles, cousins and so many others that may not be blood but were family none the less. Funeral service will be on February 5th at the LDS church in Fairfield (Cordelia), 101 Oakwood Drive from 1130-1230. Interment will be at the Sacramento Valley National Cemetery in Dixon. Arrangements are under the direction of Bryan-Braker, (707) 425-4697. You may sign the guestbook at www.bryanbraker.com

The family of Justin Wayne Wilkinson created this Life Tributes page to make it easy to share your memories.

Send flowers to the Wilkinson family.