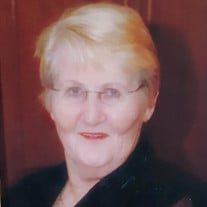 Julia Kordes, 92 yrs. old of Vacaville, California was presented her boarding pass to heaven on January 5, 2021. Julia worked hard from a little girl on her dad’s dairy farm until she was 70 years old retiring from Solano College where she earned her AA degree and there sparked her love for travel. She had many lovely tails of traveling the world with her family and dearest friends. She will always be remember as a devoted wife, mother, and grandmother for her delicious cooking and as an avid San Francisco Giants baseball fan. She enjoyed attending plays and concerts, gardening, crossword puzzles and reading. She was very involved in her grandkids activities enjoying band, softball games, soccer games and wrestling matches and so much more. Daughters Janet and Joyce were members of Rainbow Girls and Julia was a member of the Order of the Eastern Star as well as Warren was a Masonic Member. Julia was born on February 12, 1928, in Akron Ohio, the daughter of the late Michael Czibulia and Helen (Deak) Czibulia. On June 24, 1948 she married Warren (Corky) Kordes and the two were married for 35 years leaving behind 3 children: William (Tena) Kordes, Janet (Darrell) Kleinbach and Joyce (Daniel) De La Garza, 8 grandchildren: Jeffrey (Kendall) Kordes, Gregory (Nicole) Kordes, Brent Kordes, Jennifer (Valiant) Lee, Drew Kleinbach, Jessica (Dustin) Best, Adam De La Garza, and Elizabeth De La Garza and 5 great grandchildren. In addition to her husband Corky and her parents she was preceded in death by her two sisters Bertha Riffle and Irma Allen and two brothers Frank Bodosi and Daniel Bodosi. On January 22 at 11:30 am there will be grave side service at 11:30 am at the Suisun- Fairfield Cemetery on Texas Street, Fairfield CA. Arrangements have been entrusted to Bryan- Baker Funeral Home. Due to the current Covid mandate, masks are required and social distancing should be observed.

Julia Kordes, 92 yrs. old of Vacaville, California was presented her boarding pass to heaven on January 5, 2021. Julia worked hard from a little girl on her dad&#8217;s dairy farm until she was 70 years old retiring from Solano College where... View Obituary & Service Information

The family of Julia Helen Kordes created this Life Tributes page to make it easy to share your memories.

Send flowers to the Kordes family.