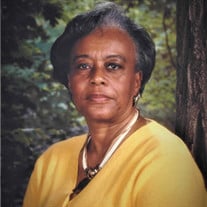 Juanita Ruth Birth Curl, 82, passed on to glory on February 20, 2020 in Vacaville, CA. She was born in Rocky Mount, NC to her parents Margaret Elizabeth Birth and James Thomas Bailey, both of whom preceded her in death. Juanita was raised by her maternal grandparents, George Washington and Annie Battle Birth, who loved her tremendously and led her to Christ at an early age. Growing up as an only child, she would find things to entertain herself like visiting with her grandparents’ old friends and dressing up her cat. She also enjoyed spending time out in the country with her cousins. However, her Uncle knew to have her back to the “city” before the sun went down. Juanita was petrified to be out there in the country in the pitch black and she didn’t care who teased her about it, she was not going to be out there in the dark. Juanita graduated in 1955 from the all black, Booker T. Washington High School in Rocky Mount, NC. She went on to attend Hampton Institute (now known as Hampton University) where she studied Education. She left Hampton Institute at the end of the fall semester in 1957, three classes shy of graduation, to care for her ailing grandmother. Along the way she met and married the love of her life, Clyde L. Curl Sr. Through this union they were blessed with five children, Clyde Jr., David Sr., Cora, Carolyn, and Carlton. She was a loving, devoted, and wonderful mother right up to her final days. As a US Air Force spouse, she lived all over the world including Norfolk, VA, Patrick AFB, FL, Richmond, CA, MacDill AFB, FL, Karamusel AB, Turkey, Eglin AFB, FL and finally Travis AFB, CA. Upon Clyde’s retirement in 1978, they settled in Vacaville, CA. While at Travis AFB, when her youngest son started walking, her mother-in-law whom she loved like a mother, watched him during the day so she could go back to school. In 1976, she graduated from Holy Names University in Oakland, CA. with a BA in Speech and Language. She went on to earn a Master’s Degree in Speech Pathology from California State University Sacramento, in 1983. Juanita started her 25+ year teaching career with the Fairfield-Suisun Unified School District. She was a dedicated Special Education Teacher and taught her “little darlings” (as she affectionately called them) at Crescent Elementary School in Suisun, CA, K.I. Jones Elementary School in Fairfield, CA. and Nelda Mundy Elementary School in Fairfield, CA. She retired in June 2002. Juanita enjoyed being involved with many organizations. She was a member of the Protestant Women of the Church (PWOC) at Travis AFB, CA, the Fairfield-Suisun Unified School District Retired Teachers Association, BSF Bible Study in Vacaville, CA and her sorority The Delta Sigma Thetas. In May 1991, she became a chartered member of the Solano Valley Alumnae Chapter, Delta Sigma Theta Inc. She served as Chaplain and was involved in many community events. She is preceded in death by her husband Clyde L. Curl Sr., her mother and father-in-law Cora and Henry Curl, her beloved Aunt Louise Jordan and a brother, Phillip Ellis, Sr. Juanita leaves to mourn her passing and cherish her memory, her sons: Clyde L. Curl Jr. of Oakland, CA; David H. Curl Sr. and his wife Wanda of Vacaville, CA; Carlton E. Curl and his wife Lisa of Pleasant Hill, CA. Her daughters: Cora L. Curl of Vacaville, CA and Carolyn E. Neal and her husband Derek of Henderson, NV. Her grandsons: Corey A. Curl and his wife Neisa of Sacramento, CA; David H. Curl Jr. of Vacaville, CA; and Cameron E. Curl of Pleasant Hill, CA. Her granddaughters: Chandelle K. Curl of Alameda, CA; Megaen E. Curl of Oakland, CA; Alana M. Curl of San Francisco, CA; Zoe E. Neal of Henderson, NV; and Caitlyn M. Curl of Pleasant Hill, CA. Her stepchildren: Betty Christian of Hampton, VA; Sonia Bullard and her husband Riccardo of Ft. Walton Beach, FL; Wayne Curl of Hampton, VA; and Debra Curl of Hampton, VA, and a host of other relatives & friends to mourn her passing.

Juanita Ruth Birth Curl, 82, passed on to glory on February 20, 2020 in Vacaville, CA. She was born in Rocky Mount, NC to her parents Margaret Elizabeth Birth and James Thomas Bailey, both of whom preceded her in death. Juanita was raised... View Obituary & Service Information

The family of Juanita Ruth Curl created this Life Tributes page to make it easy to share your memories.

Send flowers to the Curl family.