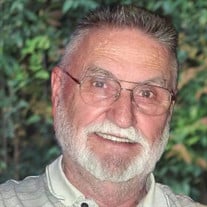 Joseph B. Stevens September 25, 1934 - May 6, 2021 Joseph B. Stevens, 86, passed away peacefully at home on May 6, 2021. Joe was born in Lincoln, Arkansas to the late Clarence and Ella Stevens. The family later settled in California, where, at the age of 19, Joe enlisted in the United States Air Force. He served proudly for 20 years, obtaining the rank of SMSgt before retiring in 1974. Following his military career, Joe settled with his family in Solano County. He was among the first employees hired at the Fairfield Anheuser Busch plant when it opened in 1976; after a second 20-year career, he retired from there in 1996. Joe was a kind, quiet, patriotic man, content with the simple pleasures of life. He was an avid baseball fan and enjoyed bowling, crossword puzzles, playing cards, RV travel with family, and spending time with Goldie Hart, his loving companion of the past nine years. Joe is survived by his daughters Kristi Swofford, Karen Stevens, and Kelly (Don) Gardner; grandchildren Eric, Daniel, Amber, Newel, Dawn, and Sage; and brothers Dan and Gary Renfro. He was preceded in death by his wife of 53 years, Hilma, and sisters Juanita Burkett and Norma Vineyard. Joe wanted it mentioned that his Travis AFB bowling leagues, Anheusuer-Busch bowling tournament trips, and monthly luncheons with fellow retirees brought him much joy and lasting memories. To those involved with these activities and his wonderful neighbors, he wanted to send his thanks and a fond farewell. There will be a graveside service with full military honors at the Sacramento Valley National Cemetery in Dixon at 3pm on June 10, 2021. Arrangements are under the care of Bryan-Braker Funeral Home, 707-425-4697. You may sign the guestbook at www.bryanbraker.com.

Joseph B. Stevens September 25, 1934 - May 6, 2021 Joseph B. Stevens, 86, passed away peacefully at home on May 6, 2021. Joe was born in Lincoln, Arkansas to the late Clarence and Ella Stevens. The family later settled in California, where,... View Obituary & Service Information

The family of Joseph Benton Stevens created this Life Tributes page to make it easy to share your memories.

Send flowers to the Stevens family.