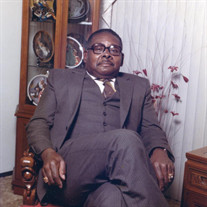 JOHN EDWARD SALLEY April 4, 1930 — March 22, 2020 John Edward Salley was born on April 4, 1930, in Sparkman, Arkansas, and passed away peacefully with his loving daughter and granddaughter by his side on March 22, 2020, in Fairfield, California. He was a loving husband, father, grandfather, great-grandfather, brother and uncle. It is with great comfort that he is together in heaven with his beloved wife, Celsa. John served his country in the military for 25-plus years. He started his military career when he was drafted in the U.S. Army and served in Europe. After serving in the Army, he decided to join the U.S. Air Force as a Jet Engine Mechanic. While in the Air Force he was stationed overseas in Asia and the Pacific. After retiring from the Air Force, he loved being an Aircraft Mechanic while he worked for the Department of Defense as a Federal Civil Service employee. After 10 years he decided to retire from the Federal Government. John enjoyed listening to music, preferably the blues and jazz. He loved reading, watching game shows and eating sweet treats. He loved working on cars and fixing things around his home. He was a great gardener. He enjoyed his children, grandchildren and great-grandchildren. He was a member of the Tri-City Elks Lodge #1662 (IBPOE). John served as chaplain for the lodge, but he will always be best remembered as Santa Claus for the Elks Lodge. He was a great Santa Claus, handing out Christmas gifts to the children in the Solano community. He is survived by his daughter, Mariza Salley-Scott, son-in-law, Philip Scott; grandson, Anthony Salley, granddaughter in-law, Shakeila McDaniel-Salley; granddaughter, Tia Scott; great-grandchildren, Za’hani, Ziono, Zuri and Zyloh McDaniel-Salley; brother, Roy T. Salley; and sister, Alice West. He is preceded in death by his beloved wife, Celsa; mother, Selma Salley; father, William Salley; brother, Elma Salley; sisters, Sephronia, Julia, Cora and Nora. Memorial visitation will be held from 10 a.m. to noon Thursday, May 28, 2020, at Bryan-Braker Funeral Home, 1850 W. Texas St., Fairfield, California. Arrangements are under the direction of Bryan-Braker Funeral Home, 707-425-4697. You may sign the guestbook at www.bryanbraker.com.

The family of John Edward Salley created this Life Tributes page to make it easy to share your memories.

Send flowers to the Salley family.