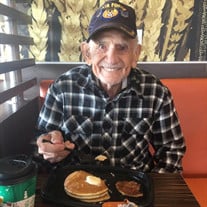 JOHN MACK LANE Oct. 3, 1922 - July 5, 2019 The world has lost a true hero. John Mack Lane was born on Oct. 3, 1922 in Brooklyn, New York and passed from this life to the next on July 5, 2019 in Woodland, California surrounded by his loving family. John lived for 96 years. During his life he had a steadfast faith in God and love for his country. He joined the 8th Army Air Force at age 19 and it was his faith in God that saw him through three wars; World War ll, the Korean War and the Viet Nam War. During his military service, he was a flight engineer and aerial gunner. His distinguished military career included 32 bombing missions in his beloved B-17G over the European and African front, being shot down three times and as a Prisoner of War. Among his military awards, he received the Purple Heart and the Silver Star for gallantry in action against an enemy of the United States. He married Marie Lousie McCrickard in April 1969. He was blessed with five children, Richard Green, James Fife, Christina Stokke, Robin Lane and Johnny Lane; eight grandchildren, Kinzie Edgeworth, Amanda and Michelle Fife, Kristen Garcia, Kathryn Cifelli, Kayla Strickland, Christian and Johnnie Lane; seven great-grandchildren, Oliver and Ayla Edgeworth, Amelia Fife, Ashlynn Wharton, Gracelynn Dickinson, Austin and Alina Cifelli. John was a quiet man with a huge heart and was known for his nearly perpetual smile. We are going to miss his smile so the most important thing you can do to help us through our sad time is to consider the following; our dad would encourage you to be caring, kind, and honest and to always remember to Smile! As we look through the tears now and see those things we will smile and think of him. Services will be at 11 a.m. Monday, July 29, 2019 at Bryan-Braker Funeral Home, 1850 W. Texas St., Fairfield. Burial committal will follow with Full US Air Force Military Honors at the Sacramento Valley National Cemetery, 5810 Midway Road Dixon, California. In lieu of flowers, we would ask that you donate in his honor to one of the many worthy military groups in need; for example, Honor Flight of Northern California, wounded warriors or The Fisher House. Arrangements are under the care of Bryan-Braker Funeral Home, 707-425-4697. You may sign the guestbook at www.bryanbraker.com.

The family of John Mack Lane created this Life Tributes page to make it easy to share your memories.

The world has lost...