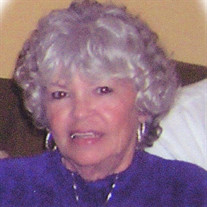 JOANN NUSBAUM Feb. 16, 1939 – Sept. 30, 2019 JoAnn Nusbaum, a long-time resident of Fairfield, passed away peacefully in her home on Sept. 30, 2019. Born Feb. 16, 1939 to Earl and Allie Simmons in Oklahoma and moved to Fairfield at the age of five. She is one of eight sisters. 'The Simmons girls'. She graduated from Armijo high school in 1957 where she met her high school sweetheart, Larry Nusbaum. They married on Dec. 20, 1958 and remained married for 61 years. JoAnn was employed by Solano County. She worked in the election department for over 20 years, from which she retired. One of JoAnn greatest joys was making a home for her family and opening her door for her children’s friends, who to this day, call her 'Jo Mama'. She was a loving mother and friend to many but especially to her four daughters, Larri Ann Nusbaum-Davis, Jerri Ann McCoy, Jody Ann Meyers, Cory Ann Gianno; she is also survived by three son-in-laws, Mark Davis, Tim Meyers and Leonard Gianno; eight grandchildren; two great-grandchildren; and numerous nieces and nephews. She will be dearly missed by all. A Memorial Service will be held at 1 p.m. Saturday, Oct. 12, 2019, at Bryan-Braker Funeral Home, 1850 W. Texas St., Fairfield. Immediately following the service will be a hosted reception also at Bryan-Braker Funeral Home. Arrangements are under the care of Bryan-Braker Funeral Home, 707-425-4697. You may sign the guestbook at www.bryanbraker.com.

The family of JoAnn Nusbaum created this Life Tributes page to make it easy to share your memories.

Send flowers to the Nusbaum family.