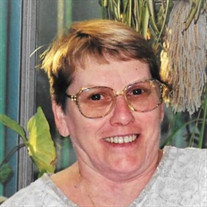 Joan Cecile Marie Castaneda passed away Sunday, June 28, 2020 surrounded by her family, at her home in Fairfield CA. Joanie was born July 4, 1934 in Methuen, Massachusetts to William C Hamel and Rose A (Morin) Hamel. She married John Castaneda on December 28, 1978. Joanie worked in the electronics industry in Massachusetts after graduating from catholic schooling and a final year in public school in Methuen. She moved to California in 1964 to start a new life in San Jose, and worked as a supervisor in the canning industry for many years. She also worked as a bus hostess after moving to Fairfield, a job she thoroughly enjoyed as it blended in with her other ambitions. She enjoyed cooking, traveling, day trips, and family. She especially loved crocheting and over the years donated over 1,000 afghans, mostly to family and to Project Linus in Vacaville. She is survived by her husband, John S Castaneda, sons Michael Stanley, Mass., Brian Stanley, NH., Kevin Rapisarda and daughter-in-law Carol, Anthony Rapisarda, San Jose CA., David and daughter-in-law Sherry Castaneda, Morgan Hill CA., Anthony and daughter-in-law Mary Lou Castaneda, OH., daughters Kathy and son-in-law Ron Orr, Arizona, Vita Rapisarda, Vacaville CA., Esther and son-in-law Robert Arquijo, TX, and Christine and son-in-law Jesse Gomez, Gilroy, CA.; and by sisters Jacqueline and brotherin-law Isaac Pipkin, NC., and Sandra and brother-in-law Jack Rivard, Maine, and by 13 grandchildren and 25 great grandchildren. She was pre-deceased by her parents, William and Rose Hamel, and brothers Ronald Hamel, William (Billy) Hamel, and most recently Robert Hamel in Massachusetts. Due to Covid19 restrictions, a very limited memorial service will be held in BryanBraker Funeral Home on July 13, followed by a family reception in Vacaville CA. Memorial donations may be made to the American Cancer Society. Further information is available at Bryan Braker Funeral Home, 707 425-4697, and you may sign the guest book at www.bryanbraker.com

The family of Joan Castaneda created this Life Tributes page to make it easy to share your memories.

Send flowers to the Castaneda family.