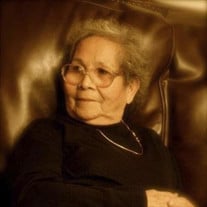 Jesusa Borja Tydingco December 23, 1934 - April 7, 2022 Jesusa was born to Josefa Cruz (familian Lazaro) & Francisco Borja (familian Paulino) on December 23, 1934 in Hagatna, Guam. In 1954, she graduated from The Academy of Our Lady of Guam High School and later married the love of her life, George Henry Lujan Tydingco on November 25, 1954. George was in the United States Air Force and together they travelled the United States and had nine children. They were last stationed at Travis Air Force Base, where Fairfield, California would become their permanent home. In 1968, Jesusa became a part of a group of Chamorros that founded the Hafa Adai Club of Fairfield. The club would sponsor an annual Easter picnic, fundraisers and many Liberation Day Fiestas. In 1974, she helped form the Guam Teen Club, and in 1978 she helped unite all of the Guam Social Clubs by forming the Federation of Guam Associations of America (FGAA). Eventually, she would become president of the Hafa Adai Club. Under her leadership in 1991, she brought the Third Annual Cultural Fair to Fairfield which was an event sponsored by the Goverment of Guam and the Hafa Adai Club. She was also a dedicated member of Our Lady of Mt. Carmel Church where she participated in several community events and cultural fairs for many years. Along with the years of support,effort, and being a role model to the community, Jesusa was most known for her commitment and dedication to her family. She took pride in being the caretaker of all of her grandkids and always had an open door policy for those that she loved. For nearly 40 years she hosted yearly family Thanksgiving and Christmas Holiday gatherings in her home with all of her family in attendance. She will forever be remembered for her unique sense of humor, her continuous lessons on the value of family, her delicious meals, especially her highly desired donuts and cinnamon rolls and most of all, her unconditional love and sacrifice she made throughout her lifetime. On Thursday, April 7, 2022 Jesusa Borja Tydingco, 87, passed away peacefully surrounded by family at her home in Fairfield, California. She is survived by her four sons: George, Vincent, Joseph (Mary), and James Daniel (Jennifer) Tydingco; four daughters Josephine and Norine Tydingco, Leonore Tagudin and Suzanne (Rick) Romero; 20 grandchildren; 21 great grandchildren and 2 brothers Francisco Cruz Borja and Antonio Borja of Guam. She was preceded in death by her parents Francisco and Josefa; her husband George Henry Lujan. Tydingco; her daughter Helen Scheff, three sisters Rosa Limtiaco, Margarita Camacho, Barbara Martinez; son in law Michael Tagudin, and step grandson Robert Chau.

The family of Jesusa Borja Tydingco created this Life Tributes page to make it easy to share your memories.

Send flowers to the Tydingco family.